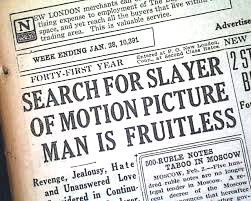 Along with other Hollywood scandals, William Desmond Taylor's murder in February 1922, which also involved two of Hollywood's biggest stars at the time led to a frenzy of sensationalist and often fabricated newspaper reports. The murder remains an official cold case. Taylor was shot in his home in the middle of the night and his death right in the midst of a slew of show business scandals and his murder led to titillating stories about life in Hollywood.
Police discovered the body of film director William Desmond Taylor in his Los Angeles bungalow and when they responded to a call about a “natural death” at the home of Taylor they found actors, actresses and studio executives rummaging through the director’s belongings. He also found Taylor lying on the living room floor with a bullet in his back.
By the 1910s, the motion picture industry was beginning to take off and so was the Taylor’s career. He started as an actor and became a director, but ultimately, what Taylor came to be remembered for most was his murder and the mystery surrounding it.