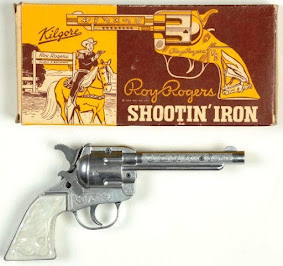 Cap guns were once a popular toy for boys. A cap gun is a toy gun that creates a loud sound simulating a gunshot and a puff of smoke when a small percussion cap is exploded. They were originally made of cast iron, but after World War II were made of zinc alloy and most newer models, yes, you can still buy them, are made of plastic.
They got their name from a “cap” which is a small disc of shock-sensitive explosive compounds roughly 0.055 to 0.063 inches in diameter that provide the noise and smoke. The noise and smoke actually mimicked the Maynard tape primer and percussion caps used in real firearms of the mid to late 1800s but they are smaller and made from cheap plastic or paper.
Some caps are arranged in plastic rings of eight or twelve. There are also single caps, roll caps (of 50 to 500), disk caps, and cap strips all of which are actually extremely small versions of percussion fireworks. The formula of the explosive has changed, but originally the powder charge was a simple mixture of potassium perchlorate, sulfur, and antimony sulfide sandwiched between two paper layers which hold in the gases long enough to give a sound report when the cap was struck.
The cap gun’s golden age was roughly a 20-year period following World War II when television became popular and the movie and television heroes were cowboys. Many cap guns were named after or endorsed by Roy Rogers, Gene Autry, Hopalong Cassidy, The Lone Ranger, Tonto, Dale Evans, Marshal Matt Dillon and others. Cap guns were also named with western-sounding names, like Stallion 45, Pony, Mustang, Cowboy, Texan etc. When the Western television shows (aka cowboy shows) began to fade, cap guns continued to be produced in military and secret agent models.
Their popularity seriously waned after the assassination of President Kennedy and eventually all of the famous cap gun manufacturers either sold out to other toy companies or started manufacturing other types of toys.
Cap guns were offered in three types: the semi-automatic, the revolver (which actually had a revolving cylinder carrying a disk of caps), and the mock-revolver which looked like a regular revolver, but swung open to load a roll of caps. 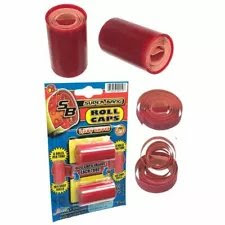 Almost all of the early models used either roll caps or circular disks of caps, but in 1950 a large model called the Stallion 45, which had a revolving cylinder into which individual bullets were loaded just like a real revolver. A small circular cap was placed into a 2-piece bullet so that when the gun was loaded and fired, it was a more realistic effect.
Mattel produced an automatic firing cap gun styled after the Thompson submachine gun. Pulling back on a slide prepared the gun for firing and when the trigger was pulled the gun fired a series of up to ten caps. from a sprocket-fed roll. It was made initially for a Dick Tracy line of toys, then camouflaged for a Green Beret Guerilla Fighter line of weapons, then restyled again as a tie-in with the Planet of the Apes franchise.
These days caps are plastic and contain gunpowder and a zinc alloy that creates a smaller (puny, actually) explosion than those of the 1950s. I remember how we would place an entire roll of caps on the sidewalk and smack them with a hammer...the resulting explosion left our ears ringing.
Ring cap guns are usually modeled after revolver pistols, with the cap ring placed in the cylinder section of the toy gun. Like a real revolver, when the trigger is pulled, the cylinder rotates a new cap into place, the hammer is drawn back, and then released the shock causes the cap to explode producing noise and smoke.
Beginning in 1988, cap guns and other toy guns in the United States must be manufactured with a bright orange, red, or yellow tip placed over the muzzle or the entire gun has to be made in these or other bright colors. Laws requiring these markings were made because of incidents where children were killed by police officers who mistook cap guns for real guns. Even so, wave one around in  front of a policeman and you are likely to be shot and killed.
Legally if a toy gun is used in a robbery, most courts would consider it  to be armed robbery, assuming that the victim reasonably believed that the weapon was real. Additionally, if a toy gun is used o strike a victim, the toy gun then actually becomes a weapon by legal definition. Thus, robbery with a fake weapon is often treated exactly the same as a case involving a real weapon.
Posted by Tartajubow at 7:15 AM