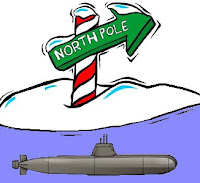 Unlike the South Pole, there is no land beneath the North Pole. The world's northernmost town is Longyearbyen located in the Norwegian archipelago of Svalbard. It is about 650 miles from the North Pole, making it the nearest town to the pole.
The temperature of the surface water of the Arctic Ocean is fairly constant at approximately 28.8 degress F which is near the freezing point of seawater. The Arctic Ocean is the smallest and shallowest of the world's five major oceans and is also the coldest of all the oceans. It is mostly covered by sea ice throughout the year and almost completely in winter.
An underwater ridge divides the North Polar Basin which is 13,100 to 14,800 feet deep and the Amerasian Basin (or the North American, or Hyperborean Basin) which is about 13,000 feet deep, but the average depth of the Arctic Ocean is 3,406 feet. The deepest point is Molloy Hole at about 18,210 feet.
In the summer of 1958 Operation Sunshine was a scientific expedition conducted by the US Navy where the USS Nautilus, the first nuclear submarine built for the US armed forces, with a crew of just over 100 sailors navigated under the North Pole. The Nautilus was chosen because its nuclear reactor allowed it to remain submerged longer than a conventional submarine. The mission was completed successfully on August 3, 1958, when the submarine passed under the North Pole.
Nautilus was not designed to be a warship but rather as a symbol for peaceful nuclear energy and the point of the trip was to show how much more advanced the technology was. The trip was suggested by William Anderson, the Captain of Nautilus.
Nautilus departed from Groton, Connecticut on August 19, 1957, for her first attempt at sailing under the Pole but it was unsuccessful because of the ice being too deep. Another attempt was not made until the next summer. On July 23, 1958, Nautilus left the Pearl Harbor and headed for the Bering Straight. The boat crossed under the pole at 11:15pm on August 3 and continued on for four more days until exiting from under the polar ice where Captain Anderson radioed to the President “Nautilus 90 North”.
The second attempt did not go without issues. They ran into large amounts of ice blockage as well as mechanical failures. It was hoped the mission was timed when the ice levels in the Arctic would be at their lowest making it easier to navigate without hitting the bottom or the top with the periscope. The expedition was also an opportunity for the Navy to experiment with different types of navigational equipment.
For a lot more information about submarines scroll down the left column of this blog to All About Submarines.
Posted by Tartajubow at 3:35 PM