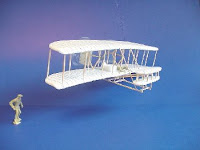 Here is a fun project for anyone who enjoys building models, especially airplanes. This site has plans for a simple, scratch-built 1903 Wright Flyer that was developed by Roger Storm at the NASA Glenn Research Center.
The model uses foam meat trays for the wings, toothpicks for most of the wooden parts and a small piece of balsa wood or bamboo  skewers for longer wooden parts. You canprobably get everything you need at the grocery store.
There are also plans for the rigging and you are shown how to make a model pilot using parts from three plastic soldiers. Templates can be printed out in pdf format. The best 12 page instructions can be downloaded at Teacher Link.

The 1903 Wright Flyer was a strange bundle of wire and cables that had little in common with today’s planes, but the Wrights’ ingenuity in identifying and controlling the complex forces that act on an aircraft in flight are still amazing.
The pilot laid prone facing the two-surface horizontal elevator. On modern aircraft the elevator and rudder are combined in the tail, but on the Flyer the elevator was in front and the rudder behind.
The two elevator surfaces generated lift and provide a reference point to the horizon. They also served to give the pilot some protection if he crashed. The reason for the pilot lying prone was create slightly less drag than a seated pilot.
The half a gallon of fuel on board was calculated to be enough to fly for 20 minutes. They engine, at the pilot's right, was started by moving a horizontal lever using the pilot's right hand to the center position. This opened the cock connecting the fuel line to the engine. Assistants then pulled the propellers, mounted in the rear and rotating I opposite direction, through in unison. The rotation in opposite directions canceled torque which tends to pull an airplane in the opposite direction of its propeller’s rotation.
Once the engine was running an assistant released the restraining wires and the plane rolled on the two hubs made from bicycle wheels along a single rail. Once the airspeed reached 20 knots, which took about 40 feet, the pilot, using his left hand pulled back very slightly on the elevator which increased lift enough to get the plane airborne.
Aviation pioneers attempted to control flight in only two axes: pitch—nose up and down, and yaw—nose side-to-side, but the Wrights were the first to understand the third: roll. They used a wing-warping system controlled the aircraft's movement around its longitudinal axis by use of a sliding hip cradle. The hip cradle deflected the edges of the wings’ outboard sections and caused the airplane to bank while the center section stayed rigid to support the propeller shafts and transmission chains. 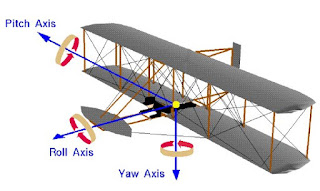 By sliding his hips, the pilot could tip one wing up and the other down causing the plane to roll in the desired direction. In the roll one wing produces slightly more lift while the other produces a slight drag. This causes the plane to roll. Today this is accomplished by ailerons. This creates an adverse yaw...the plane's nose is pointed away from the turn. The Wrights corrected for this by connecting the rear rudder to the wing-warping system.
As the airplane rolled, say to the right, the cables pivot the rudder so that its trailing edge points right. The rudder resists the yaw caused by the slowed left wing, holding the airplane so that the nose points into the turn. Even today when making a coordinated turn it is necessary for the pilot to coordinate the turn using both the rudder and ailerons.
At the end of the flight the plane landed on the sand using skids which usually ended up breaking something. The ash-and-spruce frame then had to be repaired.