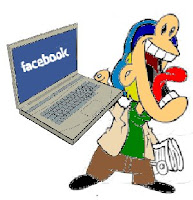 This may not seem like a big deal, but it is important to be aware of the fact that when large newspapers publish more than one edition a day, they often use dots or stars to indicate the time of day the paper was published. For example, The Wall Street Journal shows the stars just in front of the price.
Why is this important? Knowing this will prevent you from believing stupid stuff like the following meme appearing on Facebook: 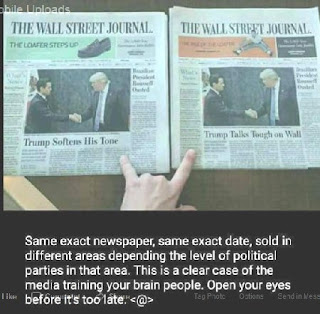 The claim is that the WSJ published the paper with the same date that was sold in different areas depending on what political parties were in the majority in that area. The meme also claims the media is “training your brain” and warning us to open our eyes before it's too late.
It's probably true that you can't believe everything printed in any newspaper, but the odds are that a Facebook meme is far more unreliable. The people who need to open their eyes and who are having their brains trained are the people who believe Facebook memes that are designed to cater to their confirmation bias.

In the case of The Wall Street Journal, the early edition on the left (two stars) was published after President Trump met with the president of Mexico and was about the cooperative tone of their meeting. The later edition on the right (4 stars) referenced his speech later in the day concerning immigration and his stance that Mexico should pay for “The Wall.”

I also read some comments by people who stated the news they read in thier part of the country was slanted differently than the same news that was printed in a different part of the county. Why is this surprising?
While there are national daily newspapers like the New York Times, Washington Post and The Wall Street Journal, most Americans get their news from a local newspaper. The vast majority of these papers are controlled by five companies (Tronc, Gannett, McClatchy, GateHouse Media and Digital First Media).
Digital First Media is owned by hedge fund Alden Global Capital, which is owned and controlled by New York investor Randall Smith.   It's not exactly clear who owns GateHouse which owns small-town dailies and weeklies in 36 states, but it's believed that it is also controlled by a New York hedge fund.
Gannett, the largest newspaper company in the US, is a publicly traded company and does not appear to be heavily involved in politics. McClatchy is also publicly traded and likewise does not appear heavily involved in politics. Tronc seems to save a fairly equal mix of Republicans and Democrats.
The point is, depending on who controls the papers and to a certain extent the personal views of those writing the stories, there is bound to be some bias depending on what corporation owns your newspaper. Nevertheless, do you really want to base your opinions on Facebook memes?
Posted by Tartajubow at 12:10 PM