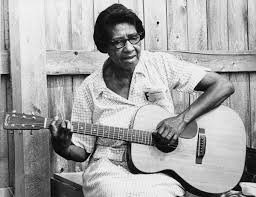 Elizabeth "Libba" Cotten (January 5, 1893 – June 29, 1987) was an blues and folk musician, singer, and songwriter.
A self-taught left-handed guitarist, she developed her own original style and played a guitar strung for a right-handed player, but played it upside down. Her signature style has become known as "Cotten picking".
She was born into a musical family near Chapel Hill, North Carolina where she was the youngest of five children. She named herself on her first day of school when the teacher asked her name because at home she was only called "Li'l Sis."
At age 7, she began to play her older brother's banjo and by the age of 8, she was playing songs. At age 9, she was forced to quit school and began work as a domestic. At the age of 11, after scraping together some money, she bought her own guitar, a Sears and Roebuck brand instrument that cost $3.75 (equivalent to $107 in 2019). Although self-taught, she became proficient at playing it and her repertoire included a large number of rags and dance tunes.
By her early teens, she was writing her own songs, one of which, "Freight Train", became one of her most recognized. She wrote the song in remembrance of a nearby train that she could hear from her childhood home.
Around the age of 13 she began working as a maid along with her mother. On November 7, 1910, at the age of 17, she married Frank Cotten. And soon after her daughter was born she gave up guitar playing for family and church.
The family moved around the eastern US for a number of years, finally settling in the Washington, DC area. After her daughter married, she got divorced and moved in with her daughter and her family.
Except for occasional church performances she didn’t play the guitar for 25 years and did not begin performing publicly and recording until she was in her 60s. She was discovered by the folk-singing Seeger family while she was working for them as a housekeeper.
While working as a maid for Ruth and Charles Seeger, she picked up a guitar and relearned to play it, almost from scratch. In the early 1960s, she went on to play concerts with some of the big names in the burgeoning folk revival. Some of these included Mississippi John  Hurt (see my post HERE), John Lee Hooker and Muddy Waters.
Using profits from her touring, record releases and awards given to her for her own contributions to the folk arts, she was able to move with her daughter and grandchildren from Washington, DC and buy a house in Syracuse, New York. She continued touring and releasing records well into her 80s. She died in June 1987, at Crouse-Irving Hospital in Syracuse, New York, at the age of 94.
Posted by Tartajubow at 11:59 AM