A cult of personality happens when a country's regime, or an individual leader uses the techniques of mass media, propaganda, the big lie, spectacle, the arts, patriotism, and government organized demonstrations and rallies to create an idealized, heroic, and worshipful image of a leader, often through unquestioning flattery and praise.
This is similar to what happens when a person is elevated or exalted to the rank of a god except that it is established by modern social engineering techniques, usually by the state or a political party. It's often seen in, but not limited to, totalitarian or authoritarian countries.
The term came to prominence in 1956, in Nikita Khrushchev's secret speech On the Cult of Personality and Its Consequences, given on the final day of the 20th Congress of the Communist Party of the Soviet Union.
In the speech, Khrushchev, who was the First Secretary of the Communist Party making him the leader of the country criticized the lionization and idealization of Stalin and the Chinese leader Mao Zedong as being contrary to Marxist doctrine.
Historian Jan Plamper says that modern-day personality cults are secular and their objects are all males; they target the entire population, not only the wealthy. They use mass media and they exist where the mass media can be controlled enough to prevent the rise of rivals.
In his 2013 paper, Thomas A. Wright stated, "The cult of personality phenomenon refers to the idealized, even god-like, public image of an individual consciously shaped and molded through constant propaganda and media exposure. As a result, one is able to manipulate others based entirely on the influence of public personality... the cult of personality perspective focuses on the often shallow, external images that many public figures cultivate to create an idealized and heroic image."
Adrian Popan observed that cult personalities are characterized by exaggerated and extravagant public demonstrations of praise. He also asserts that the media plays a major role in forging a man's cult image. In recent years the charisma of a leader may be almost entirely a product of media exposure.
The main personality traits of cult leaders is they are delusional (which can make them dangerous) and they can use their charisma to convince others to buy into the delusion.
Other cult leaders don't realize their charismatic potential at first, but once they do, they become egomaniacs. This type of cult leader may start as a teacher or in some public-speaking position. Eventually, they realize people cling onto what they have to say and that they can use those people to their advantage.
Cult leaders have psychosis (a mental disorder characterized by symptoms, such as delusions or hallucinations, that indicate impaired contact with reality) or narcissistic (an undue fascination with oneself or erotic gratification from admiration of one's own physical or mental attributes) personalities that drive them to spew out a message and convince others to follow.
Some cult leaders have been a narcissist for nearly all their life. They feel entitled to lie to you, to put up a charming facade in order to get people to believe whatever it is they're peddling.
They have great ego needs. For them, even ardent, dedicated followers, if they make one perceived mistake or slip up, are then branded as untrustworthy or a failure.
It's been said that most cult leaders are "malignant narcissists" meaning that they don't care about any damage they might do. They don't care about the lies they're telling or the people they're destroying. They need to feel needed, loved, adored and even feared.
These leaders forge an emotional tie between themselves and their followers that's hard to grasp for outsiders. The leader has to accomplish an interesting psychological trick...they have to serve as examples to their followers, but also stand above them.
They have to appear to be just an ordinary guy so that their followers can relate to them. At the same time they have to be seen as extraordinary, so that their followers will grant them permission to be the one who determines their follower's destiny. 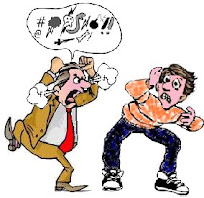 Here's an odd thing: these cult leaders are not necessarily likable people, but they manage to create a bond that causes their followers to want to identify with them. They are usually very aggressive, unpredictable and are prone to outbursts.
Their ego-laden speech usually outrages the political establishment, but delights their followers. They like to use insults, coarse language and sick humor often directed at adversaries and slogans. Very often they fall out of official favor with their political party.
Somehow even though they flaunt their wealth, they manage to connect with average people. Their appeal is less intellectual and more emotional. Regardless of his political ideas, the way he presents them makes them appear to be an extension of his personality rather than that of the party.
Posted by Tartajubow at 12:31 PM