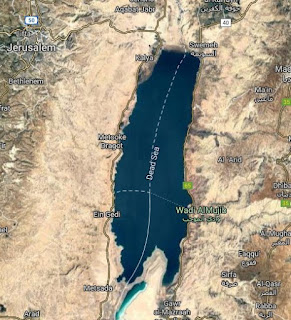 The Dead Sea, also called Salt Sea, is a landlocked salt lake between Israel and Jordan. Its eastern shore belongs to Jordan, and the southern half of its western shore belongs to Israel. The northern half of the western shore lies within the Palestinian West Bank and has been under Israeli occupation since the 1967 Arab-Israeli war.
The Jordan River, from which the Dead Sea receives nearly all its water, flows from the north into the lake. The lake has the lowest elevation on Earth. For several decades in the mid-20th century, the surface level was about 1,300 feet below sea level. Beginning in the 1960s, however, Israel and Jordan began diverting much of the Jordan River’s flow and increased the use of the lake’s water for commercial purposes. The result was a precipitous drop in the water level. By the mid-2010s, the lake level was about 1,410 feet below sea level and the lake continued to drop by about 3 feet annually. And, it’s only half the length it was a century ago.
There are beliefs that the Dead Sea has healing properties and as a result its salt and minerals are used in cosmetics and a large number of people visit the lake for therapy and relaxation.
The Dead Sea is almost 10 times saltier than ordinary seawater. This is because water flows into the Dead Sea from one main tributary, the Jordan River and it then has no way to get out of the lake and so it evaporates in the hot, dry conditions. This leads to the salt and other minerals becoming more and more concentrated. It’s estimated that in the whole of the Dead Sea there is about 37 billion tons of salt.
The high salt and mineral content of the Dead Sea means that it has supposedly has healing properties for such ailments as acne, psoriasis and as well as muscle aches and arthritis.
Its healing waters have been sought after since Biblical times. Herod the Great, who reigned between 37 to 4 BC, built one of the world’s first health spas along its shores. According to legend, Cleopatra also loved the Dead Sea and used its products as part of her beauty regime.
The lake's high salt levels mean that people can easily float on its surface. Sunbathing at the Dead Sea has less of a sunburn risk than other destinations. Due to its location below sea level the harmful UV rays are filtered through three natural layers: 1) an extra atmospheric layer 2) an evaporation layer above the Dead Sea and 3) a thick ozone layer.
The Dead Sea was home to one of the most important discoveries in modern archaeology. In 1947, the Dead Sea Scrolls were found in 11 caves near the ruins of Qumran on its northwestern shore. These manuscripts date from around 250 BC to 68 AD. They contain Biblical prayers and texts that have been key to the understanding of the beginnings of Christianity.
An unusual feature of the Dead Sea is that it spits up small pebbles and pieces of asphalt. The ancient Egyptians used to import this to use in their mummification process.
Posted by Tartajubow at 11:16 AM