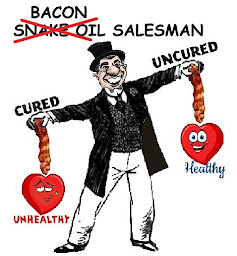 I've given you the scoop on bacon before (use the search bar to the right to find them), but the latest thing I have seen in supermarkets is "uncured" bacon.
What is that, I wondered? It sounds like it would be bad for you, like unpasteurized milk or raw eggs or under cooked meat. But then again maybe it's a healthy alternative to bacon cured with chemical preservatives.
It turns out uncured bacon is a cheap marketing trick designed to dupe consumers into thinking they are getting something special and extra healthy. Need it be mentioned that the uncured bacon will also cost a little more?
Nutrition experts have for years attempted to clarify the difference between cured and uncured bacon. As Americans become more concerned about how their meat is raised and processed, uncured bacon sounds like the healthy alternative that avoids nitrites and nitrates which preserve meat and keep spoilage bacteria from developing.
But, uncured bacon is a myth, or perhaps a better description is an outright lie. "Uncured" bacon is in fact cured, but using celery derivatives rather than sodium nitrite. Look at the ingredients - celery-derived ingredients are sometimes listed as celery juice or celery powder.
But, isn't the nitrite molecule from celery different, or more healthy? No, the molecule is the same, no matter its source. And, in fact, uncured bacon can sometimes contain higher levels of nitrites than conventionally cured bacon.
Is it possible to buy truly uncured bacon? Yes, if you can find a small local butcher who cures their own bacon using just salt, brown sugar and spices. They put the mixture on the bacon for ten days then rinse it off and smoke the bacon. Bacon made this way won’t last quite as long or look as pinkish as what you see in the grocery store, but it still cooks and tastes like bacon.
Bottom line: cured and uncured bacon from the grocery store are virtually the same thing.
Posted by Tartajubow at 1:04 PM