Smoking For Your Health 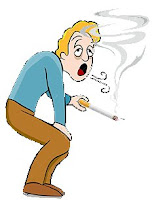 Newspaper ads in the 1890 frequently carried advertisements for an asthma cure that was “agreeable to use, certain in their effects, and harmless in their action, they may be safely smoked by ladies and children.” The product was Cigares de Joy, cigarettes designed to cure asthma and improve your quality of life.
Asthma cigarettes were recommended by nineteenth-century doctors as a convenient way of administering drugs directly to the lungs. While it seems outlandish today, asthma cigarettes formed part of the history of inhalation therapy that's medications today.
Ancient medicine interpreted asthma within the context of the four “humors”: qualities of blood, phlegm, yellow bile and black bile. It was believed they had to be in balance to maintain the health of the human body. It was believed asthma resulted from a build-up of phlegm in the lungs, so it made sense to send medicine straight to the lungs by having the patient to inhale the smoke of burning herbs. 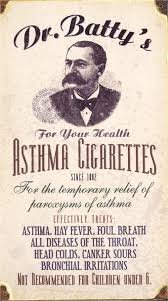 By 1800 asthma had become known as a ‘nervous’ disease caused by spasms of the bronchi. One of the main ingredients in the later asthma cigarettes, stramonium, began to take off in Britain in the first decade of the nineteenth century.
Datura stramonium, or thorn-apple, already had a following in the US, but its British popularity began as an alternative to similar treatments that were learned from Indian medicine during the East India Company’s control over the subcontinent.
Indian doctors used the plant in the treatment of lung conditions. After an East India Company physician brought samples to London sometime between 1802 and 1810, surgeon Joseph Toulmin, himself asthmatic, recognized that thorn-apple might be there might be an effective remedy and found his own asthma improved.
At first, thorn-apple was smoked in a pipe. People grew their own, but you could only use the roots and stalks because the leaves have a dangerous narcotic effect. In 1811 the Belfast Monthly Magazine claimed that thorn-apple prices shot up drastically. Then a surgeon, J.T. Fisher brought out a blend of Asthmatic Herb Tobacco. By the middle of the nineteenth century, smoking was socially acceptable, manly and cigars, cigarettes and matches were being introduced.

Henry H. Salter, a leading authority on asthma, advocated the use of ordinary tobacco, provided the patient was not already a regular smoker. In non-smokers tobacco would, he said, induce a state of vertigo, loss of power in the limbs, a sense of deadly faintness, cold sweat, inability to speak or think, nausea and vomiting. Slater claimed these side effects would halt an asthma attack.
In his 1860 book, On Asthma, Its Pathology and Treatment, Salter advised the regular use of thorn-apple as a preventive, but admitted that it was not effective in every case. By that time both stramonium and belladonna cigarettes were on the market although some people considered them to be quackery.

Dr. Batty was fictitious and his picture was the same one that appeared on Sloan's Liniment, which is still being sold today, that was being sold in the United States.
The cigarettes were recommended for asthma, hay fever, foul breath, all diseases of the throat, head colds, “canker sours” and and bronchial irritations. The label also carried a warning that they were not recommended for children under six. It wasn't until the 1950s that the first adequate treatment for asthma arrived on the market.
Posted by Tartajubow at 6:51 PM