The Slow Worms of Great Britain 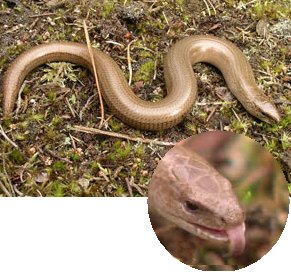 There never were any snakes in Ireland and there are no snakes in Hawaii, Iceland, New Zealand, Greenland, or Antarctica. In Ireland there have been reports of pet snakes escaping, but as of yet, no species has managed to take hold in the wild.
In England there are three species of snakes native to Britain plus a fourth, non-native species. Three of these are completely harmless - only the shy and reclusive adder, a native reptile, is venomous. Even then an adder bite is not likely going to be fatal. For a person in good health, an adder bite will hurt and nausea and dizziness might be present.
Grass snakes are the largest in Britain, reaching up to approximately 4 feet. Smooth snakes are very rarely encountered. Finally, Britain's fourth species of snake is non-native and has two known populations, in North Wales and in an area of London. They are non-venomous and feed on rodents.
There is another creature that looks like a snake, but isn't. It's the slow worm and they are pretty amazing...they are actually a type of legless lizard! The quickest way to tell a snake from a slow worm is to see if it blinks. Lizards have eyelids, snakes don't.
Slow worms are often found in gardens -and are sometimes confused with worms rather than snakes because they don't have large overlapping scales and most tend to be quite small compared to snakes. Slow worms are probably the most frequently seen reptile in Britain.
Slow worms tend to be smaller than native snakes. Adults are up to 20 inches long. Like snakes, slow worms have scales, but they feel smooth because the scales do not overlap. Also, like snakes, slow worms shed their skin as they grow, but unlike snakes, they shed their skin in patches.
They spend much of their time burrowing into loose soil and decaying vegetation. Starting about October, they tunnel underground to hibernate and remain there until March. They are food for adders, hedgehogs, badgers, magpies and lots of other birds and an occasional cat.
The worms use their tongues to sense the presence of ambush predators and somehow they are able to tell the difference between the smell of a predator snake and other harmless species.
Despite their name they can move quite quickly. But, if they can't get away, their first defense is biting, but they seldom bite people. If that doesn't work their next line of defense is defecation. Not surprisingly slow worm crap smells bad enough that it deters some predators.
If that dirty trick doesn't work they detach their tail which thrashes about for several minutes, hopefully distracting their attacker while the slow worm makes its escape. Eventually the tail grows back, but it is usually much shorter than the original. It's also no longer detachable so that's a once in a lifetime trick!
Slow worms eat a variety of invertebrates, including slugs, snails, spiders and earthworms. Besides eating their teeth have another important function...mating. During the mating ritual the male bites the back of the female and they entwine their bodies and writhe around for up to 10 hours. Female worms sometimes bear scars from these encounters.
After a gestation period of a few months, the female gives birth to up to 12 babies. Unlike most reptiles which lay eggs, slow worm eggs hatch while they're still in the female's body. She later gives birth to the hatchlings which are usually little more than an inch and a half long. They are born still wrapped in their embryonic membranes which soon burst open.
Their average lifespan in the wild is thought to be 20 to 30 years and one slow worm reportedly survived for at least 54 years in captivity at Copenhagen Zoo.
Posted by Tartajubow at 6:18 PM