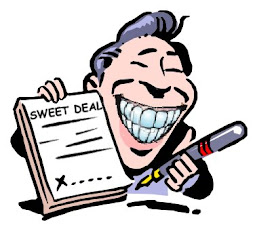 I recently contacted a well known area basement waterproofing company because I wanted them to take a look at our house just to see if they could offer a better solution than the amateur way I have our sump pumps set up.
When they called the day before to confirm the appointment they insisted that my wife be present...that's when I knew I didn't want them coming around.
I had the same experience with a window company years ago. Maybe their windows were fine, but we were really being high pressured to sign the contract before the salesman left. I literally had to tell him to leave. A couple of days later the company called and tried to sell me over the phone. In reality they were pushing a high interest rate loan!
Whenever a window company, waterproofing, siding or any home improvement company says they require that both the husband and wife be present for the quote watch out! They will tell you they need all the decision makers or everyone who might be involved with the paperwork present. Why is that?
The answer is simple...they want you both to be there so they can try to talk you into signing on the spot without taking any time to think it over and discuss it between yourselves.
Remember these companies have been in business for years, they’ve met with thousands of folks who were considering the same work be done that you are. They know if they meet with the husband alone he’s likely to say he is going to talk it over with his wife and when that happens there isn’t much the company can do to close the deal and they know the odds are significantly reduced. That's because it may be too expensive or the home owners have taken the time and trouble to get more than one quote. Hence, the pressure to get a signature on the spot.
Why does it matter so much if someone buys on the spot or takes a couple days to consider their options? For many companies it doesn’t matter because every company knows how their offer compares to their competitors. They know if their offer is a good value and they know if their prices are competitive or not.
They also know that if they let you have some time you may not sign. If you tell them you want to think it over and they tell you this deal will be gone by then you known they are skinning you! If it's really a great deal they’ll be confident enough to let you shop around. If they don't want you to shop around they are hiding something.
They also understand something about human nature. They know you are going to be hesitant to make a large decision on short notice. You’re not likely to sign a contract for a lot of money without thinking it over.
They also know nobody likes to let a good deal get away, so they try and convince you their sale is about to expire. All of these specials and sales sound good, but they are made up.
I remember the time I got a discount coupon in the mail for an oil change which I happened to need at the time anyway. When I got to the dealer and I gave him the coupon he said he didn't need it. The price was the same with or without the coupon. I asked why the coupon and was told, "It's just advertising."
There was also the time we went to buy a mattress and the salesman told us they would not sell us a mattress unless we also bought a box spring. We did not ask why, we just turned around an walked out.
There are no monthly rebates, or managers special, or neighborhood discount, or military specials or senior discounts. They’re trying to get you to be excited about the deal so they can overcome your natural hesitation and buy without taking any time to think about it. If both owners are present it increases the chance they’ll be able to talk you into something.
So, don't bother meeting with companies that insist on having both of you present. It is a good idea if you both are present, but making it a requirement is the sure fire sign that you’re going to get brow beaten. Never hesitate to tell a sleazy salesman to go pound salt!
Ten signs of a crappy cars salesman
5 signs of a bad sales rep
Psychological tricks of salesmen
Posted by Tartajubow at 8:59 AM