Asbestos As A Great Health Protection 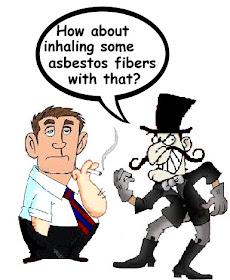 A 1950s cigarette ad for Kent cigarettes claimed that they were the only cigarette with the scientific Micronite filter that took out a lot of the nicotine and tars.
They bragged about the health benefits of adding a deadly carcinogen to their already unhealthy cigarettes. Those patented Micronite filters contained a particularly nasty form of asbestos.
Between March 1952 and May 1956, smokers smoked 13 billion Kent cigarettes before the Lorillard tobacco company changed the filter design. And, sixty years later in 2016 a Florida jury awarded more than $3.5 million in damages to a former Kent smoker stricken with mesothelioma.
Mesothelioma is an extremely rare, but deadly asbestos-related cancer that typically shows up decades after exposure. Mesothelioma victims often die within a year after being diagnosed.
Lorillard and Hollingsworth and Vose continue to face claims from mesothelioma sufferers, both tobacco factory workers and smokers who say they inhaled the microscopic fibers. The companies insist that hardly any fibers escaped, but these days sufferers are asked by doctors and lawyers if they happened to have smoked Kents in the 1950s. There is even a television commercial by a law firm that specializes in only mesothelioma cases. Actually, since the 1980s it's believed that mesothelioma claims.  However, the plaintiffs have lost most of the cases.
Kent was Lorillard’s response to the health scare of the early 1950s when smoking and lung cancer first became an issue. In those days all the tobacco ocmpany were touting the value of their filters because people were starting to quit. One company, Pall Mall (pronounced Pell-Mell) didn't jump on the bandwagon...they claimed fine tobacco was its own best filter.
They even started a marketing blitz that included ads in medical journals and Kent gift boxes for doctors along with a “Dear Doctor” letter explaining the advantages for patients who were advised to cut down or quit.
The switch to filters did prevent many from quitting so the campaign worked even though the cigarette companies' own researchers admitted that filters really didn't make cigarettes safer.
The Micronite filter was a blend of cotton, acetate, crepe paper, and crocidolite asbestos, sometimes called African or Bolivian blue asbestos because of its bluish tint. Even at that time the risk of deadly lung disease in asbestos miners and plant workers was already well documented.
At the same time it was known that asbestos was an effective filter material because it was dense enough to stop minute particles and gases. Crocidolite had been used by the Army Chemical Corps in gas masks gas masks and that's how Lorillard learned about it and began advertising their filters as “the greatest health protection in cigarette history.”
They ran ads explaining how the quest for a new filter ended in an atomic energy plant, where the makers of Kent cigarettes found a material being used to filter air of microscopic impurities. And, another add explained how the Micronite filter worked. “It’s a pure, dust-free, completely harmless material that is so safe, so effective, it actually is used to help filter the air in operating rooms of leading hospitals.”
Plant workers were heavily exposed, but how much asbestos Kent smokers inhaled has been a bone of contention. In 1954 Lorillard's director was informed by the company's research director thta they had traces of mineral fiber in the smoke, but they were working on solving the problem. A couple of months later Lorillard determined that asbestos had to be eliminated from Kent cigarettes as soon as possible. But, it wasn't because of their research. It was because their competition was running a whispering campaign about the harmful effects of asbestos.
Even so, the company continued using asbestos for another 16 months and sold existing stocks of Kents for several more months.
As mentioned, most of the court cases have been won by the cigarette company who claim the tests in the 1950s actually found smoker's exposure very low, but most of those test results have disappeared from company files.
Experts who have tested old packs of Kent cigarettes found a lot of asbestos in the smoke, but the cigarette companies counterclaim is that the tests are unreliable because the cigarettes have deteriorated with age.
A real problem for the plaintiffs in these cases is proving that they really did smoke Kent cigarettes. And, the cigarette companies have a lot of money and they hire investigators to scour the country tracking down family members, school friends, military buddies, anybody who might have known the plaintiff in the 1950s. Seriously, who remembers what brand of cigarettes a friend smoked when they were in high school or the military?!
Posted by Tartajubow at 1:46 PM