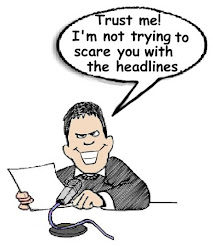 Yahoo! News seems to be biased. It magnifies issues relating to hate, especially when it comes to politics.
Founded in 1996, Yahoo! News is a news website that originally carried stories that came from popular news services such as the Associated Press, Reuters, Fox News, and the BBC. It's owned by Oath Inc., a digital media umbrella company for Verizon Communications. By 2012 Yahoo! News had a correspondent in the White House press corps and by January 2019, it ranked sixth among global news sites.
According to analyst, Yahoo News! selects more left-leaning sources. Left wing is the liberal, socialist, or radical section of a political party or system. However, a factual search reveals they are high for factual reporting.
All news sources engage in sensationalism in today's news coverage...they exaggerate stories in order to get higher ratings or sell more newspapers. Notice Yahoo! News' use of clickbait ads disguised as news stories. Methods used include the choice of words, the exaggerating of facts and making a story sound bigger than it is. They like words like "chaos" or "shocking" even if the story really isn't newsworthy, but is nothing more than a cheap way to score readers.
Instead of objective journalism and factual, quality information we are having a political agenda shoved down our throat. One fellow in the business admitted that the news media has one goal... to be addictive. They give some information and opinions or analysis so that you think they’re providing value which motivates you to come back, but the truth is the thing that they are more focused on is getting you to tune in than providing quality information.
Late last week one local television station's weather blurb, both online and on the air, blared "disruptive rain" for Saturday. We had some scattered morning sprinkles and that was it. Hardly "disruptive." See my post on sensationalizing the weather HERE.
We should not be surprised though. Way back in 1798 John Adams, the second President of the United States, said, "There has been more new error propagated by the press in the last ten years than in an hundred years before 1798."
Posted by Tartajubow at 9:13 AM