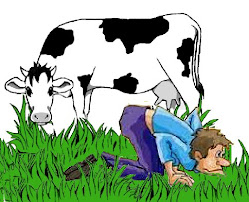 Nebuchadnezzar II was the king of Babylon circa 605 BC – c. 562 BC and was the longest reigning and most powerful monarch of the Neo-Babylonian Empire.
His conquest of Judah is described in the Bible books of Kings, Chronicles and Jeremiah. He was the king responsible for destroying Solomon's Temple and initiating the Babylonian captivity.
One night he had a dream and Daniel interpreted it for him. For seven years Nebuchadnezzar would be driven away from people and would live with the wild animals. During that time he would eat grass like the ox and be drenched with the dew of heaven.
He was told by Daniel when he (Nebuchadnezzar) acknowledged that Heaven rules, then his kingdom would be restored. Daniel's advice was to renounce his sins by doing what is right, and your wickedness by being kind to the oppressed. It may be that then your prosperity will continue. Nebuchadnezzar didn't listen and it happened just as Daniel had predicted.
Today Nebuchadnezzar's condition is recognized as a psychological disorder known as boanthropy in which a human believes they are a bovine.
Nebuchadnezzar is not the only early mention of this disorder. According to Persian traditions, the Buyid prince Majd al-Dawla was suffering from an illusion that he is a cow, making the sound of a cow and asking that to be killed so that his flesh could be consumed.
It has been suggested that hypnotism, suggestion and auto-suggestion may contribute to such beliefs. Dreams may also play an important part. Jung for example records how a stubborn woman dreamed she was attending an important social occasion. She was greeted by the hostess who told her, "How nice that you could come. All your friends are here and they are waiting for you." The hostess then led her to the door and opened it and the lady stepped through the door into a cowshed.
Freud noted cases in which a mental disease has started with a dream and in which a delusion originating in the dream has persisted.
Boanthropy is a rare and serious psychological disorder in which a human being experiences mental metamorphosis from being a human to believing he is a cow. In this condition, patient appears to walk like a cow. They stop talking like normal human beings and begin mooing. They grab others’ attention by bellowing and bawling. All of a sudden they develop a taste and craving for grass so their diet also consists of grass, hay and silage. They graze like a cow and eat whatever plant they see because that is what cows eat. They can even join a herd of cattle to graze and browse.
From behavior and diet to sounds, patients with boanthropy depict the character of a cow in real life. The cause is unknown. Many link its cause to religious perceptions or witchcraft and black magic. Boanthropy can be an additional aspect of Schizophrenia and Bipolar Disorder. A person might be hallucinating a lot which leads to altering their belief that they are a human being. There is no specific treatment, but psychotherapy and medication are generally used to try and help an individual give up their delusion.
Posted by Tartajubow at 11:20 AM