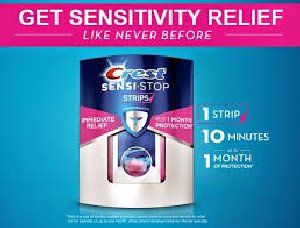 I have one very sensitive upper tooth at the back of my mouth and the dentist told me it's because the tooth is almost entirely filling and it's very near the nerve. She advised me to use Sensodyne toothpaste regularly which, for the most part, I have. She also added not to let anyone convince me a root canal was the solution because she did not think it would help. If it continues to cause trouble she felt the best solution was simply to pull it. I really don't want to do that because eventually you will run out of teeth. Normally I do use Sensodyne on a regular basis, but recently got a regular brand because it was on sale. Big mistake. Within days, due to using the regular toothpaste and flossing, the tooth had become extremely sensitive to pressure. Upon beginning to use Sensodyne again, the pain lessened, but did not abate entirely.
That's when I discovered Procter & Gamble's Crest Sensi-Stop Strips at the drug store. The six-pack has a suggested retail price of $19.99 (a 10-pack is $27.99, and a 12-pack is $34.99), but they were on clearance for $2.99 per six-pack so there was nothing to lose.
You apply one of the strips to the outer gum line for 10 minutes and it's claimed it will reduce sensitivity to cold, heat, acid or sweets for up to one month. The strips are very thin and tiny, about 3/8 inch by 1-1/8 of an inch and have a thin coating of gel on one side. So, what with big fingers and thumbs, peeling it off the plastic strip it's stuck to and sliding it into place was no small problem. And, by the way, pulling the actual strip off the plastic sheet to which it is stuck is not intuitive and peeling it off is difficult to do without messing it up.
The first strip ended up stuck to my gum and not the tooth. On the second try static electricity caused it to fold over on itself and pulling it apart resulted in the gel sticking to my finger. The third try was only marginally successful because by the time it got stuck to the sensitive tooth, I think the gel was pretty much gone. Also, once they get a little saliva on them they become extremely slippery! The strips are nearly impossible to keep in place and they slide all over and don't form to your tooth plus, apparently, they do nothing to help with teeth that are sensitive to pressure.
I ran into the same problem as another reviewer...These strips are so tiny and fragile that they're almost impossible to apply. I wasted three just to get one to stick, and that one didn't do (anything) to desensitize my tooth. The three that were wasted slipped around in my fingertips, folded in half and finally crumpled into nothing. Imagine wetting a piece of toilet paper and trying to stick it onto the side of a tooth in the back of your mouth. Yes, that's exactly what this was like. Total waste of money, and my tooth hurts just from the irritation of trying to put it on.
Then, from a doctor...These may work for your front teeth...But they are so small and flimsy that there is no chance to attach one to a back tooth. I ruined three that way at $3.00 each!. I suppose a dentist or dental assistant could do it, by a mere mortal hasn't a chance. Save your money.
But, according to almost all the reviews, they are amazing. So, did they work like everybody said they would? Not for me. They are too small and, as the one reviewer put it above, getting them into place on a back tooth seems nearly impossible and so I am glad they were on clearance for only $3.00. They may be good for front teeth that are easily reached, but for back teeth...forget it! I hate reporting this because I had high hopes for the product.
Curious as to why the drug store discontinued them and was selling them on clearance, I did some research. It seems that back in April the National Advertising Division of The Advertising Self-Regulatory Council (ASRC) determined that the Proctor & Gamble Co. can support certain claims for the product but recommended that they discontinue the claim “1 Strip, 10 minutes, 1 month” and modify packaging to clearly disclose that a single strip may not provide complete relief to some consumers. Other than that, I did not find anything about them being discontinued. Perhaps Discount Drug Mart just wasn't selling any. Or perhaps the manufacturer was selling any. Who knows? In any case, at a clearance price of $2.99 per six pack, it turns out that snatching up 6 packages was not the bargain it appeared to be.


EDIT: I did finally figure out how to get one of the strips stuck to a back tooth, but it requires some careful cutting. First, I took one of the acetate strips to which the small gel coated pad is attached and cut it down and clipped the corners. Next, using a small pair of scissors, I cut out a hole (red hatched area) slightly smaller than the gel strip and then very carefully removed the strip and placed it over the hole. Then I was able to carfully maneuver the entire contraption into place over the offending tooth, being careful not to touch anything until the piece of acetate was properly positioned. As it turned out, it did help with the pain considerably, but it was a tedious operation. Total number of strips used: 5 out of 6. 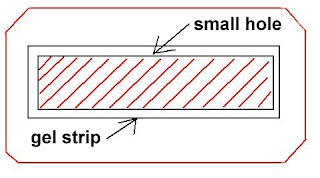 Also, I figured out why the strips were on clearance. They were the old ones that did not have the modified disclaimer on them!
Posted by Tartajubow at 3:44 PM