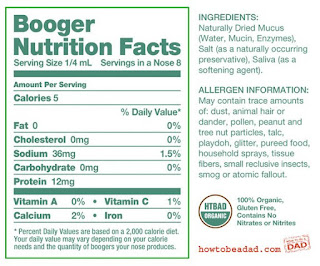 I saw an article on this subject recently. It reminded me of the time I was sitting at a red light and looked in the rear view mirror just in time to see the rather attractive lady behind me digging in her nose. She pulled her finger out, looked at it a few seconds then stuck it in her mouth and sucked whatever was on the tip of it off...I could only guess what it was.  As the article pointed out, picking and eating boogers isn't something people do in polite company, but you've probably known someone who has.
Bet you didn't know eating boogers has its own terminology. Picking your nose is known as rhinotillexis and consuming them is known as mucophagy. Rhinotillexomania is what they call obsessive nose-picking.  It's common in little kids but it is condemned in most cultures when adults do it. One study performed at the State University of New York reported that people who ate their boogers found them "tasty." Personally, I'll let Andrew Zimmern check that out. Mucous, the stuff of which boogers are made, isn't all bad... it also aids our sense of smell.
Mucous is 95 percent water, 3 percent mucin (a lubricant) and 2 percent other particles. Humans secrete 600-700 ml of mucous per day; that's a whopping 120-140 teaspoons! It's not so noticeable because most of it it is located in the back of your nose and it drips down your throat and you end up swallowing it anyway. Research has shown that mucin is a germ-repelling substance that destroys biofilms, thin layers of bacteria that create toxic hazards in many hospitals. Mucous is so slippery that it keeps bacteria swimming around so they just slide on out of the nose.
Illness can cause a drastic change in mucous. Asthma and cystic fibrosis can make mucous too sticky and viscous while having a cold or flu will make you secrete far more mucous than usual. When your body's immune system is working hard to expel bacteria or viruses, you'll often get a thick yellow or white mucous because it's full of dead white blood cells. Green boogers often come at the tail end of a sickness, and usually indicate that the normal, healthy ecosystem of bacteria inside your nose is growing back. For more information on mucous scroll down to the “All About Mucous” section in the column on the right.
Researchers discovered booger eaters were more apt to suffer from "habitual and obsessive–compulsive behaviors." They also discovered that those with psychotic issues showed correlation between nose picking and self-mutilation motives. Diagnoses have also included passive–aggressive character disorder and schizophrenia.
Boogers are made of mucous in the nostrils and usually also contain tiny hairs in the nose known as cilia. Most of the time cilia trap minute particles entering the nose, encapsulate them with mucous and move them on out, but sometimes mucous becomes either gummy or hard and crusty and you have a booger. Boogers are more likely to form in the winter because the air is drier and when people breathe in they're inhaling drier air which dries out mucous and forms a crust.
Of course excess nose picking can cause it to bleed, but some people claim boogers are good for you. The article says a biochemistry professor at the University of Saskatchewan claims that boogers contain pathogens specific to the environment and circumstance of the individual so eating your own booger could inform the body's immune system about the dangers it faces and encourage it to build up its defenses. Dr. William Schaffner of Vanderbilt University points out that we swallow nasal secretions all the time, especially when we sleep, so eating our boogers is unlikely to offer any more immune system strength.  In the end, it seems we all eat snot, it's just that most of us swallow it using a more direct route...rather than digging it out and taking it orally, it drips into the back of our throat and we swallow it. How's that for disgusting!!
Want to read more? There's a Google book article you can read called Eating Snot. Socially Unacceptable But Common. Why?
Posted by Tartajubow at 2:12 PM