You Can't Ride a Zebra 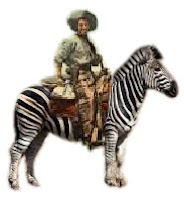 They look sort of like horses, so why can't you ride them? Zebras can be domesticated and trained, but it's not practical or humane to do so. Efforts were made to train zebras for, among other chores, riding during the late 19th and early 20th century.


One of the most famous of these attempts, and the most successful, was that of the accomplished but eccentric zoologist, Walter Rothschild, 2nd BaronRothschild.


He put considerable effort into training zebras to pull carriages, eventually driving a carriage drawn by six Zebras to Buckingham Palace in order to prove the viability of doing so, but never trained zebras to be ridden. He realized that this wasn't practical. First, they are small animals and have not had the benefits of thousands of years of breeding to produce animals with backs strong enough to support the weight of a man. And, second, he realized zebras are very aggressive. They have to be.  They have to survive in Africa where lions are their main predator. In fact, there are recorded cases of zebras killing lions, usually by a kick to the head, which kills it or breaking its jaw causing the lion to starve.

Zebras are mean and dangerous! Few people have walked away after being kicked by a zebra because a zebra doesn't just kick with its leg. It looks between its legs to see where it's kicking and then it bucks and kicks violently with both back legs. They also inflict nasty bites, not only on each other, but on people. They will bite even when tamed if people get too close.


In order to get them to draw a carriage, Rothschild used their wild behavior. Zebra herds are made up of groups of females and young with one adult male. The females follow a strict order where the most dominant female walks in front followed by the other females in order of dominance. The male goes wherever it wants, but usually stays by the side or at the back of the herd. If there is a threat, the male will place himself between the danger and the herd. If a zebra passes or attempts to pass another zebra that is more dominant than themselves then they will be bitten or kicked by the more dominant animal. The young zebras inherit the position of their mother.


Attempts were made by the Zimbabwe Department of National Parks and Wildlife Management to train zebras for work in the 1970s and 1980s, but it was determined that in order to train them, it was necessary to drastically change their natural instincts and the project was abandoned because in order to accomplish that, inhumane treatment was required.


It can be done though. An American teenager named Shea Inman trained a zebra to be ridden by using persistence and lots of treats. She discovered that zebras have short attention spans and are not as good as retaining information as horses. As mentioned though, generally zebras aren't strong enough to carry most people on their backs. Another practical factor is that a zebra's body shape doesn’t take a saddle very well.