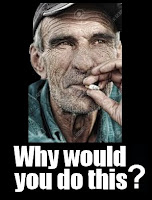 Everybody knows smoking is the single largest preventable cause of disease and premature death in the United States and it harms nearly every organ in your body, including your eyes. Heart disease and cancer aren't the only adverse effects of smoking, so is sight-threatening vision and eye problems which are less well-known.
Cataracts (clouding of the eye's natural lens) are a leading cause of blindness in the world and more than 50 percent of Americans will have a cataract or have had cataract surgery by age 80. Smokers significantly increase their risk of developing a cataract compared with non-smokers. In fact, studies show that people who smoke double their chance of forming cataracts; the more you smoke, the greater the risk.
Age-related macular degeneration (AMD) affects the center of the retina, which is responsible for sharp, central vision needed for everyday tasks such as reading and driving. It causes "blind spots" and often severely impairs central vision. AMD is the leading cause of permanent vision loss among Americans age 65 and older.
Studies show smokers can have a three-fold increase in the risk of developing AMD compared with people who have never smoked. And female smokers over age 80 are 5.5 times more likely to develop AMD than non-smokers of the same age. Fortunately, quitting smoking at any age, even later in life, can significantly reduce your risk of developing AMD.
Uveitis (inflammation of the eye's middle layer, or uvea) is a serious eye disease that can result in complete vision loss because it harms vital structures of the eye, including the iris and retina, and can lead to complications such as cataract, glaucoma and retinal detachment.
Evidence shows smokers are more likely than non-smokers to have uveitis, and smoking appears linked to the development of uveitis. One study found smoking was associated with a 2.2 times greater than normal risk of having the condition.
Diabetic retinopathy damages the blood vessels of the retina and can result in vision loss. Smoking may double the risk of developing diabetes.
Dry eye syndrome is insufficient tears on the eye's surface and results in eye redness, itchiness, a "foreign body" sensation and even watery eyes.
Tobacco smoke worsens dry eye, even among second-hand smokers, particularly for contact lens wearers. People who smoke are nearly twice as likely to have dry eyes.
Women who smoke during pregnancy transmit dangerous toxins to the placenta, potentially harming the unborn child.
Smoking while pregnant increases the chance of many fetal and infant eye disorders, among other serious health problems.  It can include crossed eyes and underdevelopment of the optic nerve, which is a leading cause of blindness in children. Also, women who smoke during pregnancy are more likely to give birth prematurely; all babies born prematurely are at greater risk of eye problems than full-term babies. Vision problems of premature babies include retinopathy of prematurity, a potentially blinding disease.

Cigarette smoking is a well-known risk factor for a wide-range of diseases. Now, scientists have evidence that smoking may also increase the risk of age-related cataract, the leading cause of blindness and vision loss in the world. Read more…

Smoking cessation has been associated with a steady decrease in risk for cataracts, but even 2 decades after quitting, that risk is still higher than in those who have never smoked, according to a new study. Read article…

Smoking has been directly linked to two of the leading causes of vision loss, cataracts and macular degeneration. In fact, researchers believe smoking also causes or contributes to a number of other eye health problems. Read article…
Posted by Tartajubow at 10:25 AM