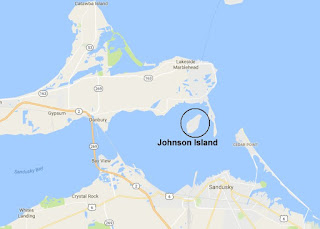 Johnson's Island is a 300-acre island in Sandusky Bay, located on the coast of Lake Erie 3 miles from the city of Sandusky, Ohio. It was the site of a prisoner-of-war camp for Confederate officers captured during the American Civil War and was the only Union prison exclusively for Southern officers but, it also held regular soldiers. Civilians who were arrested as guerrillas were also imprisoned on the island. During its three years of operation, more than 15,000 men were incarcerated there.
The island is named after L. B. Johnson, the owner of the island beginning about 1852 and was originally named Bull's Island by its first owner, Epaphras W. Bull, about 1809. In late 1861, Federal officials selected Johnson’s Island as the site for a prisoner of war camp because it offered easy access by ship for supplies to construct and maintain a prison and its population. Sandusky Bay offered more protection from the elements than on other nearby islands, which were also closer to Canada in the event of a prison break. Woods of hickory and oak trees could provide lumber and fuel. The U.S. government leased half the island from private owner Leonard B. Johnson for $500 a year, and for the duration of the war carefully controlled access to the island. 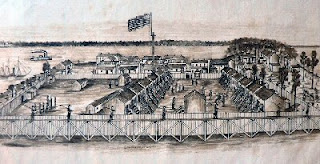 The prison opened in April 1862. It had a 15-foot-high wooden stockade which surrounded 12 two-story prisoner housing barracks, a hospital, latrines, sutler’s stand, three wells, a pest house, and two large mess halls. More than 40 buildings stood outside the prison walls, including barns, stables, a limekiln, forts, barracks for officers, and a powder magazine. They were used by the 128th Ohio VolunteerInfantry, which guarded the prison. The prisoners had amateur theatrical performances, publishing, and crafts projects available.
While life was hard at Johnson's Island, the conditions here were better than those at other Northern and Southern military prisons were. One of the main reasons for this was the type of prisoners – officers. Many of these men came from wealthier backgrounds and received financial assistance from their loved ones. Northern officials also believed officers were deserving of kinder treatment than enlisted men because of the officers' standing in society. Federal officials removed Johnson's Island's original warden, former Sandusky mayor William Pierson, in January 1864.  Pierson, a local businessman and mayor of Sandusky, was placed in charge of the Hoffman Battalion and the operation of the prison.
Pierson was a Yale graduate.  Although he was a successful businessman and politician, he had no previous military experience and was not an able prison administrator. He promulgated a series of arbitrary rules that tended to insult the prisoners and cause discontent and he permitted a lack of discipline to develop among the guards. Sanitary conditions steadily deteriorated within the prison because of the accumulation of garbage and because of problems associated with the development of latrines (only a few inches of soil covered the limestone base of the island). Pierson was later replaced by a camp commander with more military training and better administrative skills.
Among the prominent Confederate generals imprisoned on Johnson's Island were Isaac R. Trimble and James J. Archer (both captured at the Battle of Gettysburg), William Beall, Thomas Benton Smith, Edward Johnson and Missouri cavalryman M. Jeff Thompson and John S. Marmaduke. Lieutenant Christopher Columbus Nash, later the sheriff of Grant Parish, Louisiana, who directed the Colfax Riot in 1873, was also imprisoned at Johnson's Island.
More than 15,000 men passed through Johnson’s Island until it was closed in September 1865. Wardens lost only about 200 prisoners as a result of the harsh Ohio winters, food and fuel shortages and disease. Johnson's Island had one of the lowest mortality rates of any Civil War prison. Confederates made many escape attempts, including efforts by some to walk across the frozen Lake Erie to freedom in Canada. A handful of escapes were successful.
After the war, the prison camp was abandoned and most of the buildings were auctioned off by the Army and some were razed after falling into disrepair. The last-remaining circa-1861 block-house was burned by accident in 1901.
About 1894, a summer-resort was established at the eastern-end of the island, but the resort failed shortly later. Afterward, during the first-half of the 20th-Century, the land was used for farming and rock quarrying. Many lakeside homes have since been built and the island is now developed with two subdivisions. As a result of this development, most of the Civil War-related sites, excepting the cemetery, have been destroyed or built over.
In 1990 Johnson’s Island was designated a National Historic Landmark and a causeway was built to connect it with the mainland. The Confederate cemetery, as well as Fort Hill in the interior of the island, are accessible to the public. Ground-penetrating radar studies have proved that several graves lie outside its fence.
The Johnson's Island prison was the site for one of the most elaborately planned prison escape attempts of the Civil War.. Confederate Captains Charles Cole and John Yates Beall hoped to free the prisoners at Johnson's Island. They then would form an army from these inmates and travel to Columbus to free the prisoners at Camp Chase. After freeing these men, this newly formed Confederate army would operate across Ohio and create havoc in the heart of the North. It was hoped the Union would have to divert soldiers operating in the Confederacy to deal with this threat.
The plan began during the early summer of 1864, when Charles Cole arrived in Sandusky. He was working as a representative of the Mount Hope Oil Company of Pennsylvania. Cole used this position to win the trust of some of Sandusky's prominent residents and a number of Union army officers. Cole succeeded in having ten Confederates enlisted in the 128th Ohio Infantry. These ten men were stationed at Johnson's Island and would assist. John Beall and a group of Confederates would seize control of a passenger steamship operating on Lake Erie and then sail into Sandusky Bay. They would then approach the only Union gunboat on Lake Erie and seize it.
On September 19, 1864, Beall and twenty-five men seized control of the passenger steamship and headed towards Sandusky Bay, anchored the ship and waited for a signal from Cole who had planned a dinner party aboard the Michigan for the ship's officers the next day.
Before Cole could carry out his plot, an officer from Johnson's Island arrived with an arrest warrant. A telegram had arrived earlier that day ordering Cole's arrest for spying. Meanwhile, aboard the passenger vessel seventeen men staged a mutiny and forced the plan to be abandoned. Charles Cole remained in prison for the duration of the war. John Yates Beal was guest of honor at a necktie party (i.e. he was hung) for spying for the Confederacy on February 24, 1865.
By the 1950s, Johnson's Island became a residential community and a popular vacation spot.
Posted by Tartajubow at 4:40 PM