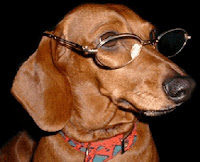 Cataract surgery a couple of years ago eliminated my need for glasses except for over the counter reading glasses. The problem is toting reading glasses around, especially in the summer when my preference is for t-shirts. As a result, I resorted to an old military trick when we were not allowed to carry anything in our shirt pockets and we carried cigarettes in our sock. I purchased a cheap case for the readers and slipped them into my sock, but that was not really convenient.
Fortunately, my insurance allows me to get new glasses annually at a nominal cost so I made an appointment with the optometrist. The plan was to get a pair of bifocals because storing them in my sock was very inconvenient. However, from experience I knew that with bifocals there was the visible line and there was an intermediate distance ranging from about three feet to 10 or 12 feet that was fuzzy, so I inquired about progressive lenses. 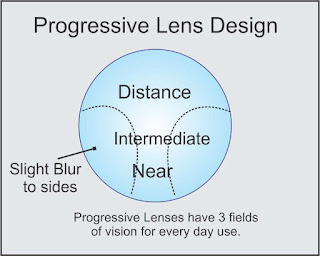 Progressive lenses are used to correct presbyopia or the loss of elasticity of the lens which typically occurs in middle and old age. Sometimes referred to as no-line bifocals, progressive lenses have three visual fields for viewing distant objects, intermediate objects and close-up objects that allow the wearer to see clearly at all distances.
To my surprise, the optometrist did not recommend them in my case. With plenty of advantages, progressive lenses also come with a few disadvantages.
The optometrist explained that many people have a difficult time adjusting to the different lens powers in progressive lenses especially if they have been long time regular bifocals wearers as I had been. If wearers are not used to multiple changes in lens power, progressive lenses can make them nauseous and dizzy at first. Another disadvantage is that peripheral vision can be slightly altered by the changes that occur at the edge of progressive lenses. This distortion in viewing is often referred to as a "swim effect."  I had never seen this mentioned in advertisements for progressive lens glasses.
There is, however, a new technology in progressive lenses used to produce Varilux S Series lenses that can reduce the swim effect by up to 90 percent. Varilux S Series lenses are the most advanced progressive lenses on the market today and are advertised to eliminate the “off-balance” feeling sometimes experienced when wearing other progressive lenses. When fitted with your first pair of progressive lenses, you may need a short adaptation period to become fully comfortable. This might take only a few minutes, or it could take a few days.
There's also a financial catch. Varilux lenses are progressive lenses and range in retail price from $340 to $845 due to the higher costs involved in manufacturing these lenses by fabrication and molding. According to Consumer Reports, as of 2015 the median price for ordinary frames and lenses at Visionworks is $200. Varilux lenses range in retail price from $340 to $845, but can go as high as $1,200
Minor peripheral aberrations are unavoidable in progressive lenses because it is impossible to create a line-free multifocal lens that has multiple powers for different viewing distances without also creating unwanted aberrations somewhere in the lens. Lens designers and manufacturers have made significant strides in minimizing these aberrations, but peripheral aberrations will be present even when progressive lenses are flawlessly produced using the latest manufacturing equipment and processes...they are an unavoidable optical limitation of all progressive lenses.
Because of these aberrations, if you glance to the far right or left, especially when looking down, you might notice your vision is slightly blurred. These aberrations also might cause you to experience a sensation of "swim" when you make quick head movements. If you experience these problems when you start wearing a new pair of progressive lenses, you usually can eliminate them by making head movements to look more directly at objects. For most people this problem eventually disappears. So claim the manufacturers and sellers, but as the optometrist explained, this is most likely going to be the case for first time wearers. For people who are older and/or have been wearing regular bifocals for a long time, they may find it especially hard to adjust.
Her recommendation was I don't need glasses, but if I wanted a pair for convenience sake, get regular bifocals and as for the fuzzy intermediate vision, just live with it.
.
Posted by Tartajubow at 9:19 AM