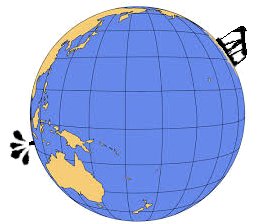 There was a fake news clickbait article that recently appeared stating that the deepest hole on Earth was sealed after finding a fossil that is 2 billion years old. Of course, that's not true.
The ad referenced a Soviet engineering project, the Kola Superdeep Borehole, that took place from the late 1960s to the early 1990s and has photos that are...surprise...unrelated to the article.
The article notwithstanding, the deepest hole on earth is the Kola Superdeep Borehole which is 9 inches in diameter and 40,230 feet (7.6 miles) deep. The hole was abandoned in 1992 when drillers encountered higher-than-expected temperatures of 356 degrees Fahrenheit, not the 212 degrees they had expected. The unexpected high temperatures wreaked havoc on equipment plus the liquid the environment made it hard to maintain the hole.
The Kola Peninsula is is deep in the Arctic Circle and is covered with lakes, forests, mists and snow. Nowadays the drilling site is a crumbling building with a concrete floor with a heavy, rusty metal cap secured by a ring of thick and rusty metal bolts embedded in the floor.
The hole is the deepest man made hole on Earth and deepest artificial point on Earth and the locals swear you can hear the screams of souls tortured in hell. It took almost 20 years to drill those 40,230 feet, but the drill bit was only about one-third of the way through the crust to the Earth’s mantle when the project came to a halt. Following the collapse of the Soviet Union there was no money to fund such projects and eventually the whole facility was closed down. Now the desolate site is a destination for tourists.
Not many people know, but during the Cold War there was a race by the superpowers to drill as deep as possible into the Earth’s crust and even to reach the mantle of the planet itself.
When the Russians started to drill they claimed they had found free water, a claim that was simply not believed by most scientists. There used to be common understanding among Western scientists that the crust was so dense 3 miles down that water could not get through it.
If the Earth is like an onion, the crust is like the thin skin of the planet. It is only 25 miles thick. Beyond this, is the 1,800-mile deep mantle and beyond that, right at the center of the Earth, is the core.
Like the space race, the race to the explore this unknown frontier was a demonstration of engineering prowess and cutting-edge technology...scientists were going where no human had gone before. The rock samples were potentially as important for science as anything NASA brought back from the moon.
Nobody really won this drilling race though. The Soviets started drilling in 1970, but in the late 1950s the American Miscellaneous Society came up with the first serious plan to drill down to the mantle. The society, which eventually became no more than a "club", was an informal group made up of the leading members of the US scientific community. Their attempt was called Project Mohole.
The project took a short cut by drilling through the Pacific Ocean floor off Guadalupe, Mexico because the Earth’s crust is thinner there; the disadvantage is that the thinnest areas of crust is usually where the ocean is at its deepest.
The Soviets started to drill in the Arctic Circle in 1970. In 1990, the German Continental Deep Drilling Program began drilling in Bavaria and eventually drilled down to 5.6 miles.
For these projects the needed technology had to be invented from scratch. When in 1961 Project Mohole began to drill into the seabed, the technology for deep-sea drilling for oil and gas didn't exist. Even something called dynamic positioning, which allows a drill ship to stay in its position over the well didn't exist. To solve the problem engineers installed a system of propellers along the sides of the drill ship to keep it steady over the hole. In 1967, Congress canceled the funding for Project Mohole when costs began to spiral out of control.
One of the biggest challenges was the need to drill a hole that is now a standard technology in the oil and gas fields of the world. Drilling as vertical as possible is necessary because otherwise torque on the drills and kinks in the hole are a serious issue.
For the US, the Soviets and the Germans who began their own drilling project, all of them ended in a frustration. There were false start and blockages, then there were the high temperatures, cost and, of course, the politics.
At the German hole Dutch artist Lotte Geevan lowered her microphone, protected by a thermal shield, down and picked up a deep rumbling sound that scientists couldn’t explain. Some people thought sounded like hell while others thought they could hear the planet breathe. The drill rig is still there and it's a tourist attraction today.
The purpose of the drilling projects, besides just going where no man has gone before is to get rock samples...exciting stuff.
By the way, how long would it take a person to fall the 40,000+ feet to the bottom of the Soviet's hole? Of course that's not possible because a person wouldn't fit in an 8 inch diameter hole, but:

Posted by Tartajubow at 8:19 AM