“the architectural space in which bodies are replenished, inspected, and cultivated, and where one is left alone for private reflection - to develop and affirm identity.”- This quote appeared in a catalog assembled for the 2014 Venice Biennale to accompany an exhibition on architectural elements, the bathroom.

This is, of course, a natural followup to the post on toilet paper. 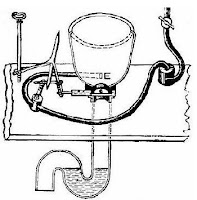 Surprise...in the ancient world people were capable of designing quite sophisticated toilets. It has been discovered that some of the stone age farmers who lived in a village at Skara Brae in the Orkney Islands who lived in stone huts had drains built under them and some houses had cubicles over the drains. They may have been inside toilets.
In Ancient Egypt rich people had bathrooms and toilets in their homes. Toilet seats were made of limestone. Poor people made do with a wooden stool with a hole in it. Underneath was a container filled with sand which had to be emptied by hand either by the individual, or if you were wealthy, servants.
In the Indus Valley civilization (c.2,600-1,900 BC) streets were built on a grid pattern and networks of sewers were dug under them and the toilets were flushed with water. On the island of Crete the Minoan civilization (2,000 to 1,600 BC) built drainage systems which also took sewage. Their toilets were also flushed with water.

The Romans built sewers to collect rainwater and sewage. In fact, they even had a goddess named Cloacina who was the goddess of sewers! Wealthy people had their own toilets but the Romans also built public lavatories. They had no privacy, just stone seats next to one another without partitions. After using the toilet, wiping was accomplished using a sponge on a stick...apparently a community sponge at that.

In the Middle Ages toilets were less sophisticated...pits in the ground with wooden seats. However monks built stone or wooden lavatories over rivers. In Great Britain at Portchester Castle the monks built stone chutes leading to the sea so that when the tide went in and out it would flush away the sewage. Public lavatories were rare though and people went wherever they could. The first modern public lavatory complete with flushing toilets opened in London in 1852. Toilet paper went on sale in the USA in 1857, but for many years was a luxury. Not surprisingly, in Great Britain people were forbidden to go in the courtyards of royal palaces.
In Medieval castles the toilet was called a garderobe and it was simply a vertical shaft with a stone seat at the top and most of them emptied into the moat. Wealthy people usually used use to wipe wipe with but everybody else often used a plant called common mullein or woolly mullein.

In 1596 Sir John Harrington invented a flushing lavatory with a cistern, but for some odd reason his invention never caught on. People continued to use chamber pots or cess pits, which were cleaned by men called gong farmers.
In 1775 Alexander Cumming was granted a patent for a flushing lavatory and three years later Joseph Brahmah made a better design. Note: Thomas Crapper did not invent the flushing toilet; he did however popularize it.  Flushing toilets were a luxury and did not become common till the late 19th century.
Also popular in the 19th century were earth closets. In the 19th century toilet pans were made of porcelain and were usually decorated, embossed or painted with attractive colors. Seats were of wood and cisterns were often emptied by pulling a chain. At first toilet bowls were boxed in but the first pedestal toilet bowl was made in 1884. Inside toilets were a luxury in the 19th century and most people's homes had outside toilets.
If you were in the Navy or Marine Corps or own a boat, you know toilets are called the head. That's because originally they were just wooden boards with holes cut in them hanging over the sides of the ships. They were placed at the head of the ship.
These days there is even a World Toilet Organization which was formed in 2001 to improve toilets in the developing world.
Back in February of 2013 we took a trip to Disney World and made a side trip to a tourist trap called The Holy Land Experience...take a look at their urinals...black marble with golden fixtures... 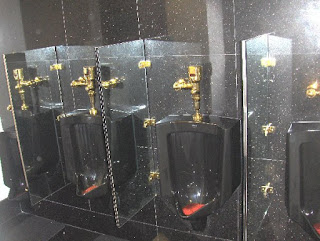 Posted by Tartajubow at 1:21 PM