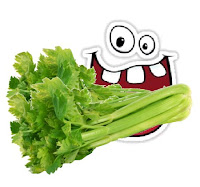 Celery is an unsung health food. Recent research has greatly increased the knowledge about celery's anti-inflammatory health benefits, including its protection against inflammation in the digestive tract itself. Some of the unique chemicals in celery appear especially important in producing anti-inflammatory benefits. Scientists have identified at least a dozen types of antioxidant nutrients in celery.
Celery is a great choice if you are watching your weight because one large stalk contains only 10 calories, but it has many other values:


•Celery reduces inflammation. If you are suffering from joint pains, lung infections, asthma, or acne, eating more celery will bring relief.
•It helps you calm down. The minerals in celery, especially magnesium, and the essential oil in it, soothe the nervous system. If you enjoy a celery-based snack in the evening, you may sleep better.
•It regulates the body’s alkaline balance, thus protecting you from problems caused by an overly acidic diet.
•Celery aids digestion. The high water content of celery, combined with the insoluble fiber in it, makes it a great tool for easy passage of stool. Note: because celery has diuretic and cleansing properties, avoid eating it if diarrhea is a problem.
•It contains good salts. Celery does contain sodium, but it is not the same thing as table salt. The salt in celery is organic and natural.
•Celery is good for your eyes. One large stalk of celery delivers 5 percent of your daily need for Vitamin A, a group of nutrients that protects the eyes and prevents age-related degeneration of vision.
•Celery reduces bad cholesterol: There is a component in celery which gives the vegetable its flavor and scent. But the compound also reduces bad cholesterol. A Chicago University study profiled by the New York Times shows that the compound found in four stalks of celery a day can reduce bad cholesterol (LDL) by up to 7 percent.
•It lowers blood pressure. An active compound in celery has been proven to boost circulatory health. Raw, whole celery reduces high blood pressure.
•It could amp up your sex life: According to Dr. Alan R. Hirsch, Director of the Smeel and Taste Treatment and Research Foundation, two pheromones in celery boost arousal levels that are released when chewing on a celery stalk.
•Celery can combat cancer: Two studies at the University of Illinois show that a powerful flavonoid in celery inhibits the growth of cancer cells, especially in the pancreas. Another study suggests that the regular intake of celery could significantly delay the formation of breast cancer cells.
Posted by Tartajubow at 1:11 PM