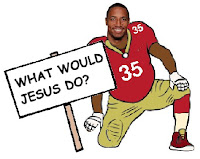 I am surprised at how little some people claiming to be Christians actually know about the religion they claim to belong to. Christians believe that Jesus is the Jewish Messiah, but few recognize the fact that the first Christians were a sect of Judaism.
Opry Winfrey has called herself a Christian, but believes there is more than one way to God which is in direct opposition to the Christian belief that nobody can come to God except through Jesus Christ. Something Opry does not believe as she is on record as saying there is more than one way to God. I am not even sure that when she talks about God, she means the God the Bible speaks of. Of late she has been taking people on a "spiritual" journey that includes many faiths and is really nothing more than a marketing plan for her books and spiritual classes.
Now comes a football player for the San Francisco 49ers named Eric Reid who says he is a Christian. I don't know anything about Eric Reid's spiritual condition or his devotion to Christianity, but he is sadly misinformed about the purpose that Jesus had.


In support Colin Kaepernick's social justice movement, Reid has demonstrated by kneeling at the playing of the National Anthem before the start of the game. He also brought Jesus into the controversy by claiming people should ask the question, “What would Jesus do?” Reid says he wants to be a ''voice for the voiceless,'' quoting a Bible verse found in Proverbs and he wants speak up for those who can't do it for themselves. This is a noble desire, but I doubt Jesus would get involved by kneeling at a football game. As a sidebar, some people think that linking Jesus with the protest is acceptable, but when another football player, Tim Tebow, expressed his Christian faith he was mocked and vilified.


Reid, along with many Christians, want to bring Jesus into this protest, but it may come as a surprise to them that Jesus did not get involved in the politics of the day and there was plenty with which to get involved.


Roman Emperor Tiberius was unpopular and spent his last years in a life of debauchery on the island of Capri; one of his infamous appointees was Pontius Pilate. Tiberius was followed by his grandnephew and the great-grandson of Augustus, Gaius Caligula who became absorbed with power, demanded that he be addressed as a god, and proposed that his horse be made a consul. He also drained the treasury to pay for his life style and reckless building activities, and he caused a crisis among the Jews by demanding that statues of himself be set up in the Temple at Jerusalem.


The Romans kept slaves. When the Romans went to the circus it was to view brutal spectacles such as chariot racing where drivers were hurt in spectacular crashes, wild beasts tear each other apart, or gladiators fighting exotic beasts or each other to the death. If an emperor wanted rid of a particular senator, he would simply write him a letter ordering him to kill himself or else send someone to do the job. Rome was brutal in its enforcement of its religious views. Several wars were fought with the Jews in order to try and get them to accept the worship of the deceased Roman emperors as gods. The fighting was so fierce Jerusalem was destroyed and with it the ancient temple of Solomon was razed. All this among other things. And yet Jesus chose not to become involved in any of the political factions of the day, the Jewish government or the government of Rome.


When it came to politics, the message Jesus preached was about government, but one He would bring to the earth, not one that would come about through human effort. It was about a government of God that will rule the world and that will bring about world peace.


When Jesus was on trial before Pontius Pilate, the Roman procurator of Judea, Pilate asked Jesus about His political aspirations, asking “Are You the King of the Jews?” The answer...”My kingdom is not of this world...My kingdom is not from here.”


The biblical record shows that Jesus was not involved in politics, so when the people ask what Jesus would do in this situation, the answer is, “Nothing.” That was not his purpose. His purpose, and the purpose of His disciples, was to proclaim Jesus as the Jewish Messiah and the concern was for men's souls and how they might be made right with God.


Also, when Vice President Mark Pence left a football game between the Indianapolis Colts and the San Francisco 49ers last month after some players knelt during the National Anthem, saying he did not want to "dignify" the demonstration, both he and President Trump were heavily criticized. Eric Reid, who has participated in the kneeling protests, criticized the walkout saying it was a planned political stunt. Is Reid stupid? Isn't that what he is doing when he kneels during the National Anthem and doesn't Vice President Pence have the right to counter-protest by walking out?


My issue is that if Eric Reid has a complaint there exist many ways he can register it. Start a blog, go on Facebook, tweet about it, organize a political movement or a peaceful demonstration, but don't do it on the job. For all the lip service these guys are paying their cause and all their kneeling, it's not costing them anything. They still go out and play the game, drive their expensive cars, wear expensive clothes and jewelry, live in multi-million dollar homes and draw a salary that's more than most people make in a lifetime. When I think of an athlete like Curt Flood or someone like Rosa Parks, it's hard to take somebody like Eric Reid seriously.
Posted by Tartajubow at 1:05 PM