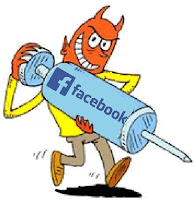 Few people are aware that Facebook and other social media are intentionally exploiting people’s psychological vulnerabilities to keep them addicted to their sites. And, that's according to the man who made a fortune as one of Facebook's early investors and first president, Sean Parker.
Facebook claims its purpose is to make the world open and connected, build communities and bring the world closer together. Bull! In an interview Parker admitted to being something of a conscientious objector to social media and having some regret about his own role in helping to mold Facebook into what it has become. Parker is on record as saying the goal was to figure out how to consume as much of the user's time and attention as possible. The idea was to try and give users a little dopamine hit every whenever they got validation of a post with a like, share or favorable comment.
Facebook has become more than just sharing inane social stuff. CBS’ television program 60 Minutes ran a program with the theme of brain hacking and featured Dopamine Labs, company produces a software program called Skinner (named after behaviorist psychologist B.F. Skinner) that companies can use to monitor their own apps and tweak them to make them even more addictive. Interestingly, the company is playing on both sides of the fence. Dopamine also offers an app called Space that helps people manage their notifications and the time they spend online.
While it is perfectly acceptable to use Facebook as a means of entertainment, when Facebook activities start interfering with a person's everyday life they have a problem. There are a lot of users who think nothing of voluntarily sharing intimate secrets about their lives and often saying things they later regret. Other spend a lot of time checking their posts for comments, likes and shares to the point that Facebook interferes with free time activity or they are constantly switching between work or assignments to their Facebook page. It was such a problem that the company I worked for had to go to the extreme of forbidding employees from using Facebook on company time.
For many, their Facebook image is all-important. They are always trying to project a certain image of who they are to others. Most of us have “friends” (I use quotation marks because I have seen people with thousands of “friends” - who has that many friends??) who are constantly appearing on Facebook who post about everything they are doing and uploading selfies, etc. For some users, there is an intense desire to add friends. There is race to see who has the highest number of friends in a quest to be seen as more popular. I have also seen posts by family members who have taken their family squabbles public and I know of two people who chose to reveal their sexual orientation on Facebook.
Research done by psychologists from Edinburgh Napier University found that Facebook users with more friends tend to be more stressed up when using Facebook. The more friends they have, the more they feel pressured to maintain appropriate etiquette for different types of friends while remaining entertaining. It results in a vicious cycle of increasing Facebook-related tensions, resulting in worse addiction outcomes.
People who become over-reliant on Facebook to fulfill their social needs may start sacrificing the time spent on real-life interaction with people. As a result non-verbal communication such as body language, gestures, voice tones, etc. becomes more and more difficult for them to interpret which makes real-life interaction more and more difficult for them.

Facebook Addiction and the Brain
One study found that the brains of people who report compulsive urges to use the social networking show some brain patterns similar to those found in drug addicts. A major difference is that in Facebook addicts the brain regions that inhibit impulsive behavior seems unaffected.
Also, according to some studies Facebook (and other social networking sites) can have a profound impact by hurting a woman's body image, cause people to obsess over failed relationships and even lead some people into depression. In fact, there's term called "fear of missing out" in which some people get depressed because they aren't taking part in many of the activities they see on Facebook.
Psychological tests on Facebook addicts have even revealed that Facebook cues were much more potent triggers in people's brains than the traffic signs. How important is that finding? It means that, if they are driving on a street next to someone who has a compulsive relationship with Facebook, they are going to respond faster to a ringing cellphone than to street signs.
What causes addiction? A trigger, such as loneliness, boredom or stress; an action, such as logging in to Facebook; an unpredictable or variable reward, such as scrolling through a mix of juicy and boring tidbits in the newsfeed; and investment, which includes posting pictures or liking someone's status update. This comes from said the startup founder and author of Hooked: How to Build Habit-Forming Products.

Posted by Tartajubow at 9:04 AM