Question. If you keep swatting at a mosquito, will it leave you alone? 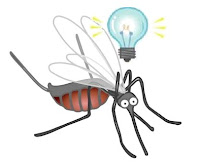 Also from a New York Times article, some scientists think so. It depends, they say. A mosquito may be willing to risk its life for a meal, but if there’s a more attractive or easier victim to feed from, a mosquito may move on. They say that if you keep trying and missing, the mosquito may learn to associate your swatting vibrations with your scent.
Mosquitoes do not just bite anything according to a neuroecologist at The University of Washington. They prefer people over other animals and some people over others. Attraction depends on how a person looks, smells or acts. But when a feeding situation isn’t favorable, a mosquito can switch preferences.
They ran some experiments and discovered that some initially attractive odors became threatening signals that the mosquitoes learned to avoid and chose to approach a new odor instead. For at least 24 hours, they retained this memory.
How do mosquitoes locate their prey? From far away, carbon dioxide from our breath draws them in and triggers their visual system to seek out high contrast objects as a potential meal. Up close, mosquitoes detect odor, temperature, sweat and even the presence of alcohol or pregnancy (pregnant women emit more carbon dioxide). If signs don't check out, the mosquito doesn’t bite.
The whole purpose of the experiments is to understand how mosquitoes process select hosts and then develop ways to control disease. Another possibility might be to impair learning in mosquitoes with insecticides or genetic tools.
Posted by Tartajubow at 4:35 PM