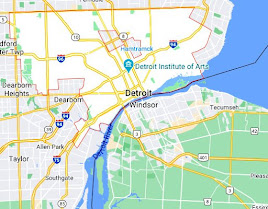 While we were shopping for some home decor stuff the other day I chanced to look at a globe and was surprised to find that if you flew straight south from where I live you would exit the US at Cape Haze on the west coast of Florida. After that the next land would be the tip of the Florida Keys and then Havana, Cuba. The next land would be the western end of Panama. After that you wouldn't hit land until you reached Antarctica!
Other odd map facts: In Maine there is a peninsula called Quoddy Head which is 3,154 miles away from El Beddouza, Morocco, making Maine the closest state to Africa.
When you think of a warm places to be in the winter time Rome sounds nice, but it's actually further north than New York City. Rome's average low in January is 35.8F, for New York City it's 32.6F.  Not much difference, but it snows a lot more in New York City. The average winter weather in Rome is rainy and chilly, but it's rare to see snow in the winter. Last year New York got almost 41 inches of snow.
In fact, Rome is on the same latitude as Chicago which, as I can attest, is not a nice place to be in the winter. They average 36 inches of snow a year. In 1978 Chicago had almost 90 inches. Barcelona and Istanbul are also on the same latitude as Chicago, but both cities very rarely see snow.
Minneapolis, Minnesota is on the same latitude as Paris, but the temperature in Minneapolis can dip 60 degrees below zero and accumulate 3 feet of snow in less than 24 hours while Paris averages 15 snow days a year, but it rarely gets more than a dusting.
Which state is the northernmost, westernmost and easternmost state in the US? The correct answer is Alaska. Alaska's uninhabited Semisopochnoi Island lies just west of the International Dateline, technically making it the easternmost point of the United States.
How big is Africa? Africa could comfortably fit most of the US, India and China within the continent. If you are in certain parts of Detroit and drive south you'll end up in Canada. Seriously! Check a map.
100 amazing world maps
Posted by Tartajubow at 7:01 PM