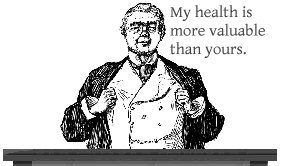 By now everybody in the world knows President Trump has been reported to have COVID-19.
According to Dr. Uché Blackstock, a Yahoo News medical contributor and CEO of Advancing Health Equity, when speaking of possible treatments for the president, stated, “Given his stature as president, he would have access to those therapeutics while the average American would not.”
So, the president's health is more important than that of other citizens. In fact, it is not.
William Henry Harrison, Zachary Taylor, Abraham Lincoln, James A. Garfield, William McKinley, Warren G. Harding, Franklin D. Roosevelt and John F. Kennedy all died in office and guess what? The Vice President took office and the government kept on functioning.
If there are treatments available to the president then there are treatments available for everybody. Remember back in 1991 when basketball star Magic Johnson announced that he had AIDS? It was believed that he had pronounced his own death sentence, but he hadn't. Why? Because he had access to drugs that were unavailable to others at that time. Position and money gets you privileges not available to others and that's the way it is.
Posted by Tartajubow at 1:21 PM