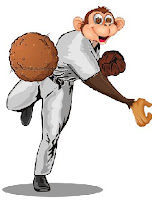 Once upon a time I worked with a fellow whose hobby was raising sea horses. The pet store where he bought his supplies had a chimpanzee that ran loose in the store and when you went into the store there was a sign warning customers to watch the critter because it was known to sneak up on people and spit at them. In fact, my fellow employee told of the night he was in the store and took a big hawker on the back of the neck.
Chimps also attack, bite and throw feces. Why anyone would want to own a 200-pound pet that would spit, throw feces and try to bite your face off is beyond me, but people do. These chimps are often friendly fixtures, but they can be dangerous.
Chimpanzees have a genetic profile that's very close to that of humans and they can appear to be cute, hairy people-like creatures, but these animals have something humans don't have...brute strength.
Most of the time they attack through cage bars and they like to bite off fingers. The attacks generally happen with people the animals don't know, but sometimes they attack owners and other handlers like scientists and researchers.
Chimps in the wild are not used to people and they're afraid of them. That's why wild chimp attacks are extremely rare. A chimp has strength that for a human would be incomprehensible. Chimpanzee males have been measured as having five times the arm strength as a human male. They also have big canine teeth that can take your face off, no problem.
Chimps in the wild are pretty aggressive with other chimps. They have warfare among social groups and males kill each other and they have been known to kill baby chimps.
Talk about aggression! In a fight they go for the face, the hands and feet and... the testicles. To outsiders, they have very nasty behaviors. Males are more aggressive than females, but when it comes to people the chimp is familiar with there may be some underlying tension that is often impossible to figure out. These animals are like a like a time bomb waiting to go off.
It happens that visitors at a zoo have become the targets of feces thrown by apes or monkeys. Why do they do it? Researchers studying such behavior have come to the conclusion that throwing feces, or any object, is actually a sign of high ordered behavior.
The research focused on chimpanzees mainly because they are our closest relatives in the animal kingdom. Interestingly, they are the only other species besides humans that throw things with a clear target in mind.
Brain scans of chimps throwing things found that chimps that both threw more and were more likely to hit their targets showed heightened development in the motor cortex and more connections between it and an area of the brain which is an important part of speech in humans.
Like human baseball pitchers, some chimps throw better than others. The better chimp throwers had more highly developed left brain hemispheres which is where speech processing occurs in people. Researchers found that the best throwers also appeared to be better communicators within their group.
They also found that throwing stuff at someone else became a form of self expression. When they throw a handful of crap at someone does it mean they don't like them for some reason? Or, do they feel threatened or angry? Or, are they just bored and throwing crap is a crap load of fun? Who knows?
Posted by Tartajubow at 8:10 AM