Congressman Wins Reelection While In Prison 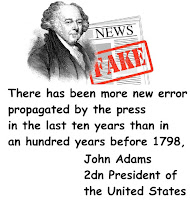 Ecclesiastes 1:9 says “What has been will be again, what has been done will be done again; there is nothing new under the sun.”

In the margins a book titled Condorcet’s Treatise Outlines of an Historical View of the Progress of the Human Mind, President John Adams wrote a note where the author, a French philosopher, predicted that a free press would advance knowledge and create a more informed public.
Adams took umbrage with that opinion. His scribbled note read, “There has been more new error propagated by the press in the last ten years than in an hundred years before 1798.”
The 1795 book believed that a press free from censorship would result in an open debate of ideas, with rationality and truth winning out. Adams’ belief was that when the truth is up for debate, the press, which he thought was partisan, would take the opportunity to spread falsehoods...you know, like lies and fake news that we see all over the place today.
If you go back to the 1640s and read the newspapers and pamphlets published in both England and the colonial U.S. America they were way ahead of their time with misleading stories.
Exactly what is fake news anyway? In a 2017 paper published in the journal Digital Journalism, researchers at Singapore's Nanyang Technological University came up with six definitions. How many have you seen on social media?

1) News satire, which use humor to contextualize and mock real-world events.
2) News parody which differs from satire in that platforms create made-up stories for comedic purposes.
3) Propaganda created by the government to influence public perception.
4) Manipulations of real photos or videos to create a false impression.
5) Material produced by advertising or public relations teams that appear as though it has been generated by reliable news outlets.
6) News fabrication which is material with no factual basis that attempts to pass as legitimate news.

Sometimes it can be very, very difficult to tell when you’re reading fake news, especially when stories are published by a a site run by a political party.  These days we also see a lot of politicians dismiss genuine reporting that they disagree with by claiming the real news story is fake news and it is false and misleading.
Thomas Hutchinson was a businessman, historian, and a prominent Loyalist politician of the Province of Massachusetts Bay in the years before the American Revolution. He cried that freedom of the press had been interpreted as the freedom to “print every Thing that is Libelous and Slanderous.”
In 1765, arsonists burned Hutchinson’s house to the ground over the Stamp Act, an act of the British Parliament in 1765 that exacted revenue from the American colonies by imposing a stamp duty on newspapers and legal and commercial documents. The problem was, Hutchinson was not even in favor of the Stamp Act! He was a victim of fake reporting by Samuel Adams, a statesman, political philosopher, and one of the Founding Fathers of the United States with little regard for facts.
An example of partisan reporting was the National Gazette established in 1791 by Philip Freneau, a friend of James Madison and Thomas Jefferson.  Its purpose was to give the new Democratic-Republican party an alternative platform to the Federalist newspaper of record, the Gazette of the United-States.
As president, John Adams suffered vicious and personal attacks. The Philadelphia Aurora called the him old, querulous, bald, blind, crippled and toothless.
The influential Federalist newspaper, the Porcupine's Gazette, actually urged the government to regulate the press. "Unless opposition newspapers were dealt with immediately a set of villainous Republican editors, most unquestionably in the pay of France, would continue to distribute their corroding poison throughout the Union."
The Federalists wanted to prevent attacks they believed were dangerous to the stability of the new United States and at the same time protect the First Amendment right to a free press. That’s why it was left up to the courts and juries to decide whether printed material was truthful or inflammatory and seditious in the Sedition Act of 1798.
In one of the first tests of freedom of speech, the House passed the Sedition Act, permitting the deportation, fine, or imprisonment of anyone deemed a threat or publishing “false, scandalous, or malicious writing” against the government of the United States.

Vermont Congressman Matthew Lyon was the first to be charged under the Sedition Act. During his trial he argued that the Sedition Act was unconstitutional. He further argued that the allegedly seditious letter he wrote against John Adams was written before the act was passed. He also pointed out that he had no malicious intent and that the content was truthful. The jury found Lyon guilty and he was sentenced to four months in jail and a fine.
Behind bars, he remained vocal about the injustices of the Sedition Act and became the first congressman to run and win reelection in prison.
Posted by Tartajubow at 7:01 AM