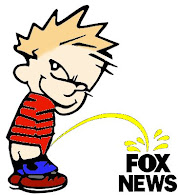 Fox News issued a report criticizing Vice President Kamala Harris for not saluting the military honor guard at Air Force Two. This report was a deliberate attempt by Fox to stir up outrage and is a disgusting example of "reporting."
The Vice President is a civilian and is not in the military chain of command and she was not violating protocol and she was not being disrespectful to men and women in uniform.
While it is true that former Vice Presidents Mike Pence and Joe Biden (when he was VP) did render a salute, Dick Cheney, who was VP under President George W. Bush, did not.
Even the President, who is the Commander-in-Chief, is a civilian and is not required to salute. When he was President, Ronald Reagan began the practice as a matter of courtesy.
Tom Nichols of RadioFreeTom correctly reported that the Commander in Chief returns salutes as a matter of courtesy, but the VP is a civilian who is not in the chain of command. It would be incorrect for her to salute anyone and Fox News knows this. If other VPs did it, it was incorrect.
Mr. Nichols is mostly correct except for the statement if other Vice Presidents did it, it was incorrect. The dictionary defines a salute as a "gesture of respect, homage, or polite recognition or acknowledgment, especially one made to or by a person when arriving or departing." Although it may be unusual for a civilian to salute someone as a gesture of respect it is perfectly acceptable.
We salute Fox News for their reporting...the one finger kind.
Posted by Tartajubow at 12:10 PM