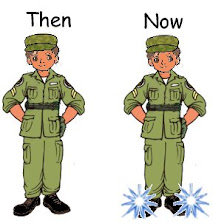 It used to be that in the Marine Corps the standard for shoes and boots was the spit shine. To achieve the spit shine you needed a can of Kiwi shoe polish, a brush, spit (or water), a cloth (or small bottle) and a ton of elbow grease. Today patent leather has taken the place of the spit shine...sad. But wait! Patent leather is not new...it's history spans thousands of years!
Patent leather has its roots in rubber which was first used thousands of years ago in Mexico. In 1736, Charles Marie de La Condamine brought samples to France’s Scientific Society and eventually the knowledge of rubber began to spread around Europe and England. In 1770, Joseph Priestley in England observed that the material worked very well for rubbing pencil marks off of paper, hence the nickname of rubber.
Patent leather is is water resistant and has a high shine and some consider it "classy." It originated in the late 1700s when layers of oils were applied to dyed leather and dried. The resulting surface was durable and water resistant. Oils have since been replaced with synthetic materials and patent leather is commonly used in shoes, wallets, bags and accessories.
One of the first inventors to produce a leather that was waterproof also obtained a patent covering the method of production. Thus, because it was made through a patented process, it was commonly referred to as patent leather.
Patent leather is characterized by having a very clear, shiny, polished surface that is generally water resistant which helps provide durability by protecting the leather underneath. On the down side, the glossy surface is prone to scratches and must be cared for well.
Originally, patent leather was made from natural leather, but over time it has become much more common for it to be made from faux leather with synthetic coatings. The lower (read cheap) production costs of synthetic materials allowed patent leather to surge in popularity in the 1960s.
After World War II many advancements had been made in materials technology, and there was increased demand for consumer goods. On result was that patent leather quickly became popular. This included fake leather with its synthetic clear coatings that looked like real patent leather. This faux leather looks similar and is much less expensive which makes it popular.
Over the years, some materials have been produced that are similar in appearance and properties to patent leather...faux faux leather so to speak! One of the most popular was Corfam.
In 1963 at the Chicago Shoe Show, DuPont introduced a type of leather substitute. It’s goal was, to by 1984, have Corfam comprise about a quarter of the United States shoe market. While Corfam was shiny and water repellent, it was not breathable or as flexible as real leather. Nevertheless, the low cost and durability of PVC (plastic) leather made it appealing. By 1971, DuPont stopped selling Corfam because their hopes and goals for the product didn't materialize.
Due to the outer coating being plastic, it will degrade over years and it, so while it may look great, it's not extremely durable. The coating is usually a polyurethane or acrylic coating (plastic). They can be clear, result in a high shine, and remain flexible once dried. Pigment can also be added to the resin coatings to add color. Additionally, additives can be put into the coatings to increase desirable performance factors such as scratch resistance, abrasion resistance, and UV resistance.
Patent leather cracks because it is made of a plastic and over time the plastic begins to weaken and degrade. Due to the flexing the plastic will begin to crack over time. Also, due to the high-gloss finish, patent leather is very prone to scuffing. Additionally, patent leather is covered with a clear plastic layer that over time, as the plastic begins to degrade, it takes on a yellow tint. 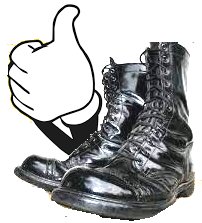 Bottom line: a spit shine on real leather beats the shiny fake-looking patent leather hands down.
Posted by Tartajubow at 8:36 AM