There Is A Chicken Shortage 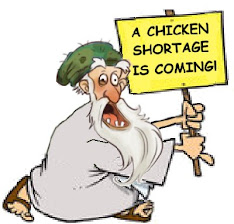 At first it sounded like an alarmist hoax, but upon further investigation, it is true.
Chicken is popular in the United States (though not with me) and the popularity of chicken sandwiches, chicken nuggets, chicken and waffles and chicken wings is fueling such demand that the country is starting to run short. Actually, it's not like we weren't warned...doomsayers predicted it months ago when they warned there was a massive chicken wing shortage on the horizon.
There are three reasons for the shortage: covid-19, a sandwich craze and huge appetite for wings. YUM Brands which owns Kentucky Fries Chicken has announced that the demand for their new chicken sandwich (described as a mouth-watering extra crispy filet with premium pickles, and mayo on a brioche-style bun) has been so strong that, coupled with general tightening in domestic chicken supply, it's hard for them to keep up with the demand.
Also, the price of wings is going up as some restaurant owners are having to shell out more than $3 per pound for wings, the consumption of which has been on the rise since 2020. For example, back in February of 2020, the huge demand for wings on Super Bowl Sunday coupled with devastation from the winter storms in Texas, caused a severe wing shortage.
Wing consumption causes something of a problem. Each chicken has only two of them and if people order a bucket with 20 wings, somebody has to eat the rest of those 10 chickens that supplied them.
Not everybody in the world goes for wings and breasts like we do in the US. Europeans pay a premium for the breasts, while the Chinese market has a greater demand for the feet. Russians prefer dark meat, and in India people particularly enjoy the leg.
The National Chicken Council says that the US consume 60 percent of the dark meat produced in the country and much of the rest gets shipped overseas. This exacerbates the problem by increasing the carbon footprint because shipping produces carbon and costs a lot of energy which impacts the environment. Shipping chicken requires it to be stored in temperature-controlled containers. While food is generally shipped by sea instead of by air, saving some emissions, maritime shipping accounts for nearly 3 percent of all carbon emissions, equal to the output of Germany.
According to the United Poultry Concerns the US production of the 8 billion chickens consumed each year produce nearly 86 million tons of manure which creates toxic environments for the chickens, but it also presents major disposal problems. Some chicken poop can be used for fertilizer, but much ends up in water runoff. Did you know that chickens contribute about 12 million pounds of nitrogen to the Chesapeake Bay each year? Probably not. As a result over 80 percent of the bay is at least partially damaged by toxic contaminants. Environmentalist, who oppose everything, warn that the chicken industry destroys wildlife and wildlife habitat. They complain, "It just ruins every place it opens for business."
Posted by Tartajubow at 7:34 AM