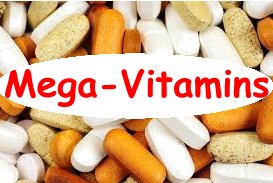 Megavitamin therapy is the use of large doses of vitamins, often many times greater than the recommended dietary allowance in the attempt to prevent or treat diseases. Megavitamin therapy is typically used in alternative medicine by practitioners who call their approach "orthomolecular medicine", but also used in mainstream medicine for "exceedingly rare" genetic conditions that respond to megadoses of vitamins.
Nutrients may be useful in preventing and treating some illnesses, but the conclusions of medical research are that the broad claims of disease treatment by advocates of megavitamin therapy are unsubstantiated by the available evidence. It is generally accepted that doses of any vitamin greatly in excess of nutritional requirements, will result either in toxicity or in the excess simply being metabolized - evidence in favor of vitamin supplementation supports only doses in the normal range. Critics have described some aspects of orthomolecular medicine as food fadism or even quackery. Research on nutrient supplementation in general suggests that some nutritional supplements might be beneficial, and that others might be harmful.
That's MEGAVITAMIN therapy, but what about claims that optimum doses that should be used in both prevention and treatment should range from very small to very large, depending on what is being treated. The same is true for ANY medication...larger doses aren't always better! One thing that IS known is that vitamins may have effects which appears to be unrelated to their properties as vitamins. For example, see this report from the National Cancer Institute on Vitamin C.
Also worth reading is a report from a University of California, Berkeley biochemist that high doses of some vitamins could play a big role in the treatment of disease and perhaps slow the effects of aging.
There are the toxic side effects of megadose vitamin therapy, usually self-prescribed regimens taken by individuals and sometimes they wind up sick. It's estimated that only about 7 percent of the estimated 40 million Americans who regularly take vitamins do so under the guidance of a physician.
Toxic effects of megadoses have been discovered for most vitamins, including some, like vitamins A and C. Even some of the water-soluble B vitamins, commonly thought to be nontoxic in any amount because they are rapidly cleared from the body, are now known to cause devastating effects in megadose quantities.
Further, in some patients who are under drug treatment for an illness, taking megadoses of vitamins can interfere with their treatment. By the way, megadoses a re defined as 10 or more times the recommended daily amount.
The problem is that many times some nutritionists speak of hidden vitamin deficiencies that could cause a wide range of common symptoms and for chronic or incurable problems, they make extravagant promises. People with arthritis, diabetes, heart disease or cancer are, because of their condition, are often easy targets of such claims. As a result, it is always best to avoid megadoses unless prescribed by a physician. It's also a good idea to tell your physician if asked about medications about any supplements you are taking.
Although excessive amounts of water soluable vitamins quickly leave the body they can sometimes cause adverse effects. For example, Niacin megadoses are associated with side effects that include flushing of the face, neck and chest, abnormal heart rhythms, itching, headache, cramps, nausea and vomiting, diarrhea, abnormally low blood pressure, fast heart beat, and elevated blood sugar. In large doses niacin can cause dry skin and abnormal skin pigmentation, aggravate peptic ulcers and damage the liver.
Large doses of Vitamin B6 have been known to produce severe neurological problems including numbness, difficulty walking, sharp pains and loss of normal reflexes. Fortunately, the symptoms usually disappear after megadoses were stopped, but in some cases complete recovery took more than a year. Vitamin B6 can also interfere with therapy for Parkinson's disease and people who take as little as 200 milligrams a day may become dependent on the vitamin, with deficiency symptoms resulting if it is withdrawn too abruptly.
If Vitamin C in megadoses are abruptly stopped, scurvy can result because the body has become dependent on the high dose and large amounts of Vitamin C can interfere with lab tests for blood glucose and make a person appear to be diabetic. It can also interfere with uric acid and cholesterol tests. A megadose of Vitamin C is defined as 1,500 milligrams a day for 10 weeks and it could cause anemia.
Vitamins A, D, E and K are stored in the body in fatty tissue and can accumulate to toxic levels if excessive doses are taken on a regular basis. Vitamin A has resulted in a number of vitamin poisoning cases.
Beta-carotene can give people an orange or yellow skin color, but it can be confused with jaundice and has been reported to cause loss of menstrual periods.
Vitamin D in megadose quantities can cause toxic effects such as abdominal pain, loss of appetite, nausea, vomiting, diarrhea, headache, excessive urination and thirst, dangerously elevated calcium in the blood, calcium deposits in soft tissues, bone pain, weakness, mental confusion, cataracts and kidney failure and these symptoms can continue for a year or more after the megadoses are stopped.
Vitamin E is recommended in megadoses for everything from alleviating breast discomfort to warding off the ravages of old age and preventing cancer. Side effects could cause fatigue, nausea and blurred vision, but the most serious possibility is the destruction of vitamin K and enhancement of the effects of anticoagulant medications, which could result in hemorrhage. Patients taking anticoagulants should not take vitamin E supplements.
Another problem with taking megadoses is the accumulated ''inactive'' ingredients: fillers, flavors and coloring agents.  By Federal law, all vitamin and mineral formulas that contain 50 percent or more of the United States Recommended Daily Allowance for any nutrient must list all ingredients on the package label. However, some manufacturers, knowing that the Food and Drug Administration has more than it can handle in dealing with safety issues, ignore the law.
Posted by Tartajubow at 2:22 PM