The Man Behind the Shoe 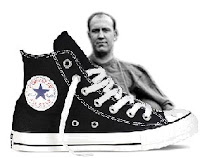 Why are Chuck Taylor athletic shoes so expensive? When I was a kid they were some of the cheapest “basketball shoes” you could get and probably cost $15 or so in today's dollars.   It appears Converse even has a no-discount policy on them these days and despite the price which is in reality cheap compared to other"athletic" shoes, people will still pay an inflated price for them. When I was a kid, you didn't demand certain shoes...you wore what your parents bought and when it came to basketball shoes as they were called, parents knew they were going to take a beating during the summer months and you'd outgrow them soon, so you got cheap Chuck Taylor's...no arguments. Some unfortunate kids with ragged clothes and hair touching their ears because they couldn't get bi-weekly haircuts actually had to wear them, along with blue jeans, during the winter. 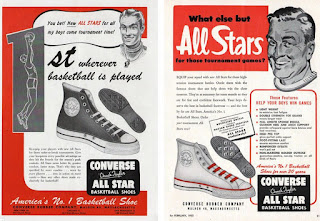 A hundred years ago Converse Rubber Company of Massachusetts created an athletic shoe with a canvas upper, a thick rubber sole, simple laces and a rubber toe cap called the All Star and nearly 800 million pairs later, this cheap shoe poor kids wore is still one of the most popular shoes on the market.
But the shoe wasn't an instant success. Sales were slow until Converse signed Chuck Taylor to the first shoe endorsement deal. Taylor, a former basketball star who played for such teams as the Original Celtics and the Akron Firestones, was recruited to represent and sell the new shoe, travel the country and promote the game of basketball.


Taylor suggested some design modifications, which were implemented in the early 1920s and sales took off and Converse rewarded Taylor by adding his signature to the shoe's trademark star patch. The overall design has remained virtually unchanged .


"Chucks," eventually disappeared from the basketball court, but during World War II they were issued to soldiers (National Stock Number 8430-00-257-3759) and they remain popular even today.