The heavy-lift helicopter of the Marine Corps can carry a 26,000-pound Light Armored Vehicle, 16 tons of cargo 50 miles and back, or enough combat-loaded Marines to lead an assault or humanitarian operation; but perhaps what's most amazing about the largest military helicopter in the U.S. is what it achieves despite its size. Though powerful enough to lift every aircraft in the Marine inventory except the KC-130, the CH-53E Super Stallion is compact enough to deploy on amphibious assault ships, and has the armament, speed and agility to qualify as much more than a heavy lifter. 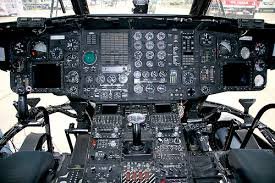 The Super Stallion is the largest and heaviest helicopter in the United States military. It was developed from the CH-53 Sea Stallion, mainly by adding a third engine, adding a seventh blade to the main rotor and canting the tail rotor 20 degrees. It was built by Sikorsky Aircraft for the United States Marine Corps.
The Super Stallion is used to transport personnel and equipment, lift heavy loads and conduct minesweeping missions. The Air Force version, equipped with sophisticated electronic countermeasures systems, is used for long-range delivery and resupply of special operations forces and combat rescue missions.
The helicopter is capable of lifting 16 tons (14.5 metric tons) at sea level, transporting the load 50 nautical miles (57.5 miles) and returning. A typical load would be a 16,000 pound (7264 kilogram) M198 howitzer or a 26,000 pound (11,804 kilogram) Light Armored Vehicle. The aircraft also can retrieve downed aircraft. The 53E is equipped with a refueling probe and can be refueled in flight giving the helicopter indefinite range.
The helicopter seats 37 passengers in its normal configuration and has provisions to carry 55 passengers with centerline seats installed. With the dual point hook systems, it can carry external loads at increased airspeeds due to the stability achieved with the dual point system.