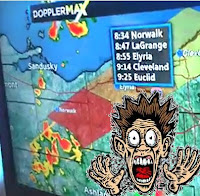 Is it just our local news stations or is it happening everywhere? I'm talking about weather forecasters, much like the rest of the news and media, who sensationalize the weather and try to scare us with their constant warnings of potentially damaging weather.
It seems like they don't do simple weather reports anymore. Instead of simply reporting the possibility of a tornado, wind, heavy rain, flooding or heavy snow, now we are bombarded with live storm tracks and warned about potential severe and devastating weather threats for even the most routine events. Even more annoying are those stupid talking heads that come on and shout like used car salesmen, “Snow tonight!!! I'll tell you how much to expect at six!” When six gets here you find out it's a dusting. It's really becoming annoying.
There's a real danger here. Years ago when I had a pilot's license and someone wanted to make a short trip they would call the flight service station and get a weather report for both going and returning. If there was a chance of thunderstorms that's what they said. Somewhere somebody got caught in a thunderstorm, crashed and was killed. The result was a lawsuit claiming the FSS didn't give an adequate warning. The result was that if there was even a slim chance that a thunderstorm might pop up over your route the FSS added the disclaimer that visual flight was not recommended. We got so many of those that people tended to disregard the warnings.
Of course, people need to be warned of bad weather coming, but if they keep making alarming claims for every storm, people will do like we pilots did with the FSS warnings. They will stop listening.
Unfortunately, sensational weather reporting has become a grab for ratings. One of the worst of these is The Weather Channel which seems to pander fear with elevated threats. Ever since TWC was acquired by NBC/Universal seven years ago it seems like they have ramped up the hype. Now they even name snowstorms. The National Weather Service doesn't name them, only TWC. Apparently if a storm has a name it sounds more menacing and they can send out reporters to the scene and bombard us with minute details of the calamity.
In times gone by no one really knew a storm was coming and people got caught. For example, in the Schoolchildren's Blizzard of 1888 residents of what is now South Dakota and the northwestern Great Plains had no warning of a January snowstorm that plunged temperatures 80 degrees. Children on long walks home (no school buses in those days) and farmers were caught outside with their animals. An estimated 235 people died and many more had frostbitten extremities amputated because they had no advance notice of the storm. 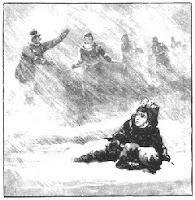 In this neck of the woods during this past winter they issued warnings that resulted in travel bans and schools and businesses closing for snow that never came.  A couple of years ago a weatherman in New Jersey opined that when he was a kid people had more faith in weather forecasters. He went on to say it has nothing to do with technology. Before the age of 24/7 news coverage people sat down and watched the 6pm or 11pm news which also included an honest forecast with no hype. There was no, in his words, “media unleashed" and “team coverage" on the streets to talk about the impending inch of snow. He called them "antics."
We've become a society fascinated by sensationalism in every aspect of our lives. What I would like to see is reliable, hype-free and an accurate forecast as possible.  I will decide if I should be scared.
Posted by Tartajubow at 9:06 AM