All but forgotten today, the Geneva Bible was the most widely read and influential English Bible of the 16th and 17th centuries. This may come as a surprise, but it was the Bible that came to America on the Mayflower that transported the first English Puritans, known today as the Pilgrims, from Plymouth, England, to the New World in 1620.
Mary I was Queen of England and Ireland from 1553 until her death in 1558 and her executions of Protestants caused her opponents to give her the sobriquet "Bloody Mary." In 1555 she revived England’s heresy laws and began burning offenders at the stake, starting with her father’s longtime advisor Thomas Cranmer, the archbishop of Canterbury. Almost 300 convicted heretics, mostly common citizens, were burned. Dozens more died in prison, and some 800 fled to Protestant strongholds in Germany and Geneva.
It was her persecution that caused the Marian Exile which drove 800 English scholars to Europe and a number of them gathered in Geneva, Switzerland. There a team of scholars led by William Whittingham, and assisted by Miles Coverdale, Christopher Goodman, Anthony Gilby, John Knox, and Thomas Sampson, produced The Geneva Bible.
The Geneva Bible became a symbol of the Protestant Reformation because when Protestants began being persecuted not only in France but also in England, many sought safe haven in Geneva, taking advantage of the opportunity to study under Calvin. It was based on Greek and Hebrew manuscripts and a revision of William Tyndale's New Testament, which first appeared in 1526. The Geneva Bible New Testament was published in 1557, with the complete Bible appearing in 1560. It became the Bible of choice for many of the greatest writers and thinkers of that time such as William Shakespeare, John Bunyan, and John Milton.
It was unique in that it was the first Bible to use chapters and numbered verses and its extensive marginal notes greatly increased its popularity. The notes were written by Reformation leaders including John Calvin and others and were intended to help explain and interpret the Scriptures for the average reader. The Bible also had study guides and aids which included cross references, introductions to each book, maps, tables, woodcut illustrations, indexes, and other features making it the first study Bible. It also used readable Roman typeface rather than the obscure Gothic black typeface. The Bible enjoyed immediate success which would continue for the next seventy five years and was the people’s choice even after 1611 when the King James Bible was released.
King James I rejected the Geneva Bible claiming it was the worst on the market. Actually, his problem with the Bible was not the translation but rather the marginal annotations which he saw as “very partial, untrue, seditious, and savoring too much of dangerous and traitorous conceits.” James’ rejection was rooted in his anti-Puritan and anti-Presbyterian beliefs.
For example, James disliked the marginal notes appearing in the book of Daniel which stated that the king must be disobeyed if he violates the will of God and commands others to do likewise. James I held that kings had been ordained by God to rule the nations of the world, to promote justice, and to dispense wisdom and it was therefore, imperative that kings should be respected and obeyed unconditionally and in all circumstances. The Geneva Bible taught otherwise. It seems King James I was unfamiliar with Acts 5:29 in which the Apostle "Peter and the other apostles answered and said, We ought to obey God rather than men.”
Despite King James I’s ridicule the King James version of the Bible was influenced by the Geneva Bible when it contributed more to the composition of the King James version of 1611, perhaps with the exception of the work of William Tyndale, than any other English version of the Bible. It’s ironic that even after publication of the King James Bible in 1611 English clergy, including James’ most trusted scholars, continued to use the Geneva Bible in their sermons.
The King James Bible took decades to overcome the more popular Geneva Bible. One of the greatest ironies of history, is that many Protestant Christian churches today embrace the King James Bible exclusively as the “only” legitimate English language translation, yet it is not a Protestant translation. It was printed by the Anglican church to compete with the Protestant Geneva Bible.
Most Protestants blame persecution on the Roman Catholic Church, but after England broke from Roman Catholicism in the 1500’s, the Church of England (The Anglican Church) persecuted Protestants throughout the 1600’s.
Throughout the 1600’s, as the Puritans and the Pilgrims fled persecution in England they took with them the Geneva Bible and rejected the King’s Bible. In America the first settlers used the Geneva Bible, not the King James Bible. 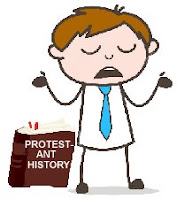 Protestants are largely unaware of their own history and that the Geneva Bible (which is textually 95 percent the same as the King James Version, but 50 years older) was not influenced by the Roman Catholic Rheims New Testament which the King James translators took into consideration. That said, the King James Bible was an excellent and accurate translation.
One little-known fact is that for the past 250 years all King James Bibles are actually the 1769 Revised Oxford Edition of the 1611 King James Bible. Modern Bible publishing companies make no mention of the fact that they are actually publishing the 1769 version because that might hurt sales among those imagining that they are reading the original 1611 version.
Posted by Tartajubow at 4:55 PM