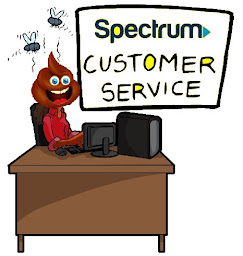 We are one of the few households that have kept our landline and we also have Internet/WiFi from the phone company, CenturyTel.
Our cable is provided by Spectrum. For the most part we have had little reason to complain about their cable TV service and when we have had a problem, up to now, the customer service reps have done a pretty decent job of correcting the issue.
The other day when our phone bill came in there was a significant jump in the cost, $30 per month! A call to the phone company revealed that we had been on some kind of promotional program that expired, hence the increase. This lead to a call to Spectrum on Tuesday afternoon to make an inquiry about bundling Internet, phone and cable.
The frustration began almost immediately with a 20 minute wait to talk to a rep and when she finally came on the line I explained that I was seeking information about pricing for bundling everything.
Frustration mounted as she began complaining that she was having computer problems and kept putting me on hold. I should have hung up and called back instead of waiting patiently. My total time on the phone was about 80 minutes, but the lady finally got me the information I was seeking.
The next morning I had an additional technical question and so called Spectrim back. After 20 minutes on hold some guy came on and that’s when I found out the rep I talked to the day before had actually signed me up for Internet and Wifi!
I was furious and told the rep that it had been made clear to the lady I was making an inquiry only and never authorized her to sign me up for anything. This guy stated, “No problem” and said because the work order hadn’t gone through he would just cancel it. Problem solved...or so I thought.
Wednesday evening we sat down to watch some television and discovered most of the channels were no longer available. Now, we have three cable boxes (family room, bedroom and library) and only one box was working...the others were disconnected!
Another call to Spectrum and a long hold. I explained the problem and requested that my service and programming be restored to what it was prior to the SNAFU of Tuesday. The snot nose, idiotic jerk told me there wasn’t anything he could do because our service was under a grandfather clause with Time-Warner and he added haughtily, "They don’t exist anymore, you know."
When I informed him I don’t care, that’s not my problem because it was a screw up by a Spectrum employee and I wanted to speak to somebody with some authority to correct the problem.
That's when he transferred me to their “Retention Department.” Let me guess. If your company has a Retention Department there must be a problem retaining customers. I was on hold for 50 minutes.
My wife was convinced the guy had just put me on ignore and so called customer service from her cell phone. After about 10 minutes she was connected to some woman to whom my wife patiently explained the problem.  This woman was so snotty and rude my wife hung up on her.
In the meantime, after a 50 minute hold a lady named Maria came on and I explained what happened. Finally I got somebody that was nice, sympathetic and very helpful.
First, she turned on all three of our cable boxes. Then she politely explained that she could not restore us to the same package that we had, but she could give us a package that was similar plus a few extra channels. I advised her that I had no intention of paying more money for this "similar package" than I had been for the old package. She assured me that I would not and it was, in fact, a few dollars a month cheaper.
While checking to make sure all three cable boxes were, in fact, turned on, I asked her if she knew who the culprit was that had totally screwed up our service. She said she did and she had sent an e-mail to her supervisor. I hope that part is true. We all have made mistakes on our jobs, but the lady I originally dealt with was unprofessional and her performance was nothing short of incompetent. And, except for Maria the other service reps were turds.
Finally, around 11 o’clock at night everything was back to pretty much normal. Then this morning my wife handed me the phone and said Spectrum was asking for me. When I took the phone I accidentally hung up on them and they never called back...no e-mails either.
Later when I checked for mail I discovered a huge package that FedEx had delivered...it was a modem from Spectrum! I am holding on to it until I am sure they didn’t charge me for it. If they didn’t I will drive it over to the Spectrum office across town and return it.
Good help is hard to find and I hope Spectrum keeps Maria because she was the one bright spot in this whole mess. However, the whole incident makes me leery of bundling our cable, Wifi and Internet with them!
FOLLOWUP:  On Friday, July 31, I received a call from Spectrum following up on my recent purchase. When I informed the caller that I did not make any purchase, but had made nothing more than an inquiry, I got no further...I was listening to a dial tone; the caller hing up on me. Revenge for when I hung up on them by accident?!  Clowns!
Posted by Tartajubow at 4:17 PM