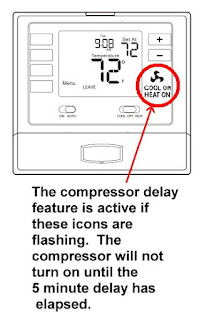 With the temperature in the mid-90s the last several days (unusual for this part of the country) our air conditioner has been getting a workout. When we returned home last night I turned the thermostat down two degrees, but the air did not come on and an icon on the thermostat was flashing. (Each thermostat model has a different display message when a delay occurs).
I had no idea what the problem was and had to check the operating instructions that came with the thermostat. The problem was that, unknown to me, the air conditioner had shut off less than five minutes before we returned and when I lowered the temperature setting the compressor delay feature was activated. Most modern air conditioners have a 5 minute time delay for the compressor to start to keep it from short cycling.
When a compressor, or any motor, starts it has a high amp draw in the first few seconds that it starts using the start winding in the motor. For example: When the compressor starts, the amp draw is 165 amps for 2 seconds on the start winding. Compressor rpms are above what the start winding requires to operate, so the compressor motor then switches to operating mode, utilizing the run winding, which draws considerably less amperage, say 12 amps.
If the compressor turns itself on and off repeatedly (known as short cycling) due to a malfunction (low refrigerant, for example) then the compressor draws high amperage on every startup until either it burns out or its thermal limit switch is activated. The thermal limit switch opens and closes to control the flow of current in response to temperature change and it will cut off the current if a temperature limit is exceeded preventing potential burn out or failure.
Posted by Tartajubow at 7:50 AM