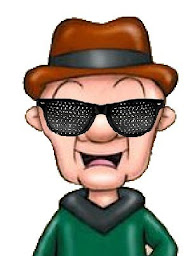 I saw an ad the other day for a pair of “pinhole” glasses which look like sunglasses with tiny holes. The claim was wearing them 15-20 minutes a day could permanently improve eyesight rather than just correct it. Additionally, they also help relieve eye strain, fatigue and headaches.
These claims are, naturally, disputed by Optometrists which says the claims are unsubstantiated.
There's no doubt that while they are being worn, pinhole glasses make for a clearer image, but what happens is similar to what happens when one squints. The glasses (and squinting) artificially makes the pupils smaller and reduces the amount of light getting through.
This pinhole effect has been known about for centuries and pinhole glasses are used by optometrists as a sight aid where conventional glasses cannot help, in the case of a scarred cornea, for example. But they are not normally used where prescription glasses can be used, because they cut down on light, and cannot give as clear an image.
Squinting helps a little bit with the clarity of vision because it changes the shape of the eyes. However, the main optical principle at work is called the pinhole effect. Squinting creates the same effect as looking through a pinhole...only a small amount of focused central light rays are allowed into the eye. This prevents the unfocused light rays in the periphery from reaching the retina which results in slightly better vision.
In the case of eye injuries resulting in blurry vision the pinhole test is very helpful. The patient looks through a small eye cover containing many tiny pinholes. If the vision improves it is unlikely that the blurred vision is related to an eye injury. It is more likely to be an existing vision problem that can be corrected by glasses. If the blurry vision does not improve through the pinholes then injury is more likely to be the problem.
Manufacturers argue that pinhole glasses have a more permanent effect. They say normal glasses encourage the eyes to become lazy, but pinhole glasses encourage the eye muscles to become stronger thereby pulling the lens into the correct shape. The theory is that the eye can be made to adapt to its environment and can be encouraged to change shape towards normal.
They claim improvements can be made within a few weeks in the case of those who use reading glasses and within a few months in the case of those with distance lenses.
The traditional view is that poor sight is for the most part genetic and is caused by the eye being too short or too long so that the image is focused either behind or in front of the retina. Optometrists say there is little evidence that muscle exercises of any kind will help poor sight.
When it comes to vision self-diagnosis is inadvisable. Optometrists also advise that walking round wearing pinhole glasses could be dangerous and warn they should never be worn while driving.
Who is right? There have been no clinical trials on the effect of pinhole glasses on permanent vision and all evidence is so far anecdotal. Manufacturers claim that optometrists are reluctant to carry out experiments.
In spite of the opinions of professionals, manufacturers try to sell pinhole glasses by making claims that they will permanently improve your vision, but the reality is that while the pinhole effect does clarify your vision, it has no lasting or long term effect. The Federal Trade Commission (FTC) filed lawsuits against companies to ban these false claims all the way back in 1993.
Posted by Tartajubow at 7:53 AM