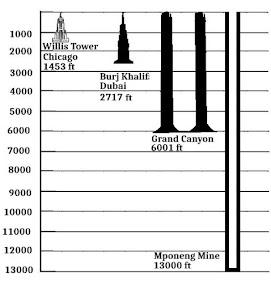 The Mponeng (the name means look at me in Sotho) Gold Mine, located southwest of Johannesburg, South Africa, has been in operation since 1986, and it holds records as the world’s deepest mine, with depths reaching over 13,000 feet, or nearly 2.5 miles.
It’s deep enough to enough to stack 10 Empire State Buildings on top of each other. The mine also has 236 miles of tunnels which is longer than the New York subway system.
Because of the mine’s depth, temperatures can reach up to 150 degrees F which is too hot for humans. Once your body is exposed to so much heat that it can’t regulate itself anymore, it’s called hyperthermia.
The human body is ill-suited to spend extended periods of time in temperatures higher than its own internal temperature, which on average clocks in at 98.6 degrees F. At that point you're on the cusp of heat stroke, which officially strikes when you reach 105 degrees. At 107 degrees, you're in serious danger because your blood flow slows and your organs sustain potentially irreversible damage. According to a Live Science article, most humans can endure about 10 minutes in 140-degree heat before suffering from hyperthermia.
To combat the heat in the mine a slurry of ice mixed with salt is pumped down from the surface, using fans to blow the air over the ice, creating its own internal weather system inside the mine.
A mixture of concrete, water, and rock is packed into excavated areas to act as an insulator and tunnel walls are secured by flexible shotcrete reinforced with steel fibers, which is held in place by diamond-mesh netting.
Approximately 4,000 miners work daily and to get to work they ride in a cage that holds 120 people at a time. The elevator takes them to the first stage of the mine located 1.6 mile down. A second elevator takes workers deeper and the last part of the mine is only accessible by foot or vehicle. The trip from the surface to the bottom of the mine takes over an hour.
It’s claimed that in order to steal gold illegal miners sneak into mine shafts and hide out for months and this, for some reason, causes them to turn ghostly white.
At a depth of 0.9 to 1.8 miles there is a rare bacteria that lives in the ground water which is one of the few known organisms that doesn’t require sunlight.
Over 5,400 tons of rock are mined daily, but gold output has steadily decreased over the ten years which has resulted in the possibility of digging even deeper. The mine only needs to extract one third of an ounce per ton excavated to remain profitable. At today’s gold prices of about $2,035 per ounce, that’s approximately $678 per ton.
Posted by Tartajubow at 8:10 AM