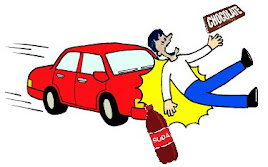 High fructose corn syrup is a sweetener which is processed from corn. Similar to regular table sugar (sucrose), it’s composed of both fructose and glucose. It became a popular sweetener in the late 1970s when the price of regular sugar was high, while corn prices were low due to government subsidies It’s used to sweeten processed foods and soft drinks — primarily in the United States. Naturally, there are those who hate the stuff because:
1. It adds an unnatural amount of fructose to your diet which can cause health issues if eaten in excessive amounts.
2. It increases your risk of fatty liver disease. One study in men and women with excess weight showed that drinking sucrose-sweetened soda for 6 months significantly increased liver fat, compared to drinking milk, diet soda, or water.
3. It increases your risk of obesity and weight gain. One study had healthy adults drink beverages containing either glucose or fructose. When comparing the two groups, the fructose drink did not stimulate regions of the brain that control appetite to the same extent as the glucose drink.
4. Excessive intake is linked to diabetes. In healthy people, insulin increases in response to the consumption of carbs, transporting them out of the bloodstream and into cells. However, regularly consuming excess fructose can make your body resistant to insulin’s effects. This decreases your body’s ability to control blood sugar levels.
5. It can increase the risk of other serious diseases. Many serious diseases have been linked to the over consumption of fructose: obesity, diabetes, heart disease, gout and cancer.
6. It contains no essential nutrients. High fructose corn syrup is “empty” calories. Avoiding high-fructose corn syrup and added sugar in general may be one of the most effective ways to improve your health and lower your risk of disease.
Now there is another reason to avoid the consumption of high fructose corn syrup...there is a correlation between its consumption and pedestrians killed by getting hit by a car, pickup or van! 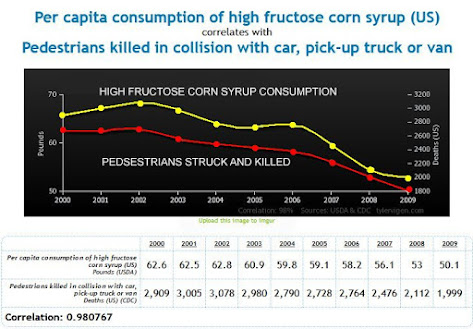 As can be seen from this chart based on data between 2000 and 2009, the correlation coefficient is 0.98. Correlation can be described as a mutual relationship or connection between two or more things. Note that the number of pedestrians killed per capita closely follows the consumption of corn syrup per capita.
The correlation coefficient has no rule for determining what size of correlation is considered strong, moderate or weak and its interpretation depends, in part, on the topic of study. When we are studying things that are difficult to measure, such as the contents of someone's mental life. When we are studying things that are more easily countable, we expect higher correlations. For example, it's generally considered that correlations above 0.75 are relatively strong; correlations between 0.45 and 0.75 are moderate and those below 0.45 are considered weak.
As is very clear from the chart, the correlation coefficient of 0.98 means that there is a direct connection between the consumption of high fructose corn syrup and the number of pedestrians killed by getting run over by a vehicle.
Here's a little secret...this statistical information is phony because it's a spurious correlation! In statistics a spurious correlation is a relationship in which two or more events or variables are not causally related to each other, yet it may be wrongly inferred that they are, due to either coincidence or the presence of an unseen factor. Biases and conditions alone may create statistical errors, errors from interpretation, false reporting, wrong assumptions, improper samples, false relationships and even bad math. Bottom line: you can prove or disprove just about anything.
Posted by Tartajubow at 4:45 PM