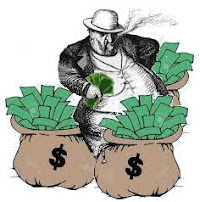 Alisa Zinovyevna Rosenbaum (1905 – March 6, 1982) was a writer and philosopher. Born and educated in Russia, she moved to the United States in 1926 where she became known for her fiction and for developing a philosophical system she named Objectivism. She is better known by her pen name Ayn Rand.
She had a play that opened on Broadway in 1935. After two early novels that were initially unsuccessful, she achieved fame with her 1943 novel, The Fountainhead. In 1957, Rand published her best-known work, the novel Atlas Shrugged. Afterward, she turned to non-fiction to promote her philosophy, publishing her own periodicals and releasing several collections of essays until her death in 1982.
Atlas Shrugged has been decribed as "an apocalyptic vision of the last stages of conflict between two classes of humanity—the looters and the non-looters. The looters are proponents of high taxation, big labor, government ownership, government spending, government planning, regulation, and redistribution."
This quote from Atlas Shrugged is even more true today than it was when she wrote it in 1957: 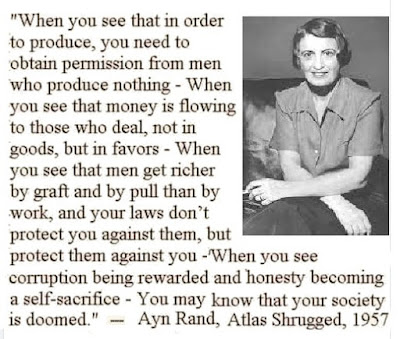 Posted by Tartajubow at 6:14 PM