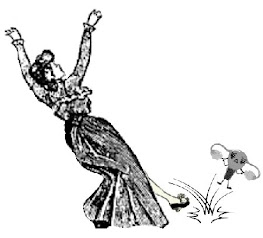 Train A, traveling 70 miles per hour leaves Westford heading toward Eastford, 260 miles away. At the same time Train B, traveling 60 mph, leaves Eastford heading toward Westford. When do the two trains meet? How far from each city do they meet?
We've all had to do those types of horrible math problrms, but once upon a time such a question would be ridiculous because nothing man made went that fast and a human being could not survive at such speeds.
Back on June 20, 1903. Barney Oldfield, a man known as America's Premier Driver, has just become the first man in America to drive a gas-powered automobile around a dirt track at the unheard of speed of a mile a minute, or 60 miles per hour.
His agent told reporters, "The chest of a driver is forced in, average lungs can't overcome the outward force and the result is like strangulation. Blood rushes to the head, temporary but complete paralysis of mind over body occurs." It was said no man could drive faster and live.
A month later Oldfield drove even faster in Yonkers, New York, and it was reported that his rear wheels slid sideways for a distance of 50 feet, throwing up a huge cloud of dirt. "Men were white-faced and breathless, while women covered their eyes and sank back, overcome by the recklessness of it all."
As automobile growth exploded in the early 1900s, they were seen by many as noisy devil wagons and women, who were it was believed, prone to fainting, physical weakness and bouts of hysteria—wouldn’t be able to control by themselves and shouldn’t be allowed to drive. However, in 1909, 22-year-old Alice Ramsey, along with three female friends, managed to drive cross-country in a 59 days proved that women could be trusted behind the wheel.
Back in the telephone's early days fears were expressed that talking on the contraption would prompt impropriety, possession or electrocution in women. It wasn't true.
Critics of early steam powered locomotives claimed that women’s bodies were not designed to go at 50 miles an hour and their uteruses would fly out of their bodies as they were accelerated to that speed. Others suspected that any human body would suffer an even worse fate...it would simply melt at such high speeds.
How Fast Did Early Trains Go?
Railways During the Victorian Era
200 years of locomotive technology
Posted by Tartajubow at 7:52 AM