Why do we ignore warnings? 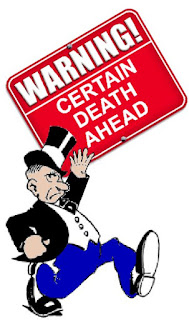 My chess blog and this one used to experience a large number of spam, both in the comments section and my associated e-mail. As one can plainly see it is made perfectly clear that all spam will be deleted. Comments do not appear until I approve them (which I usually do) and if you e-mail me using the form at the right, when you hit send you will be asked to prove you're a human.
So, my question is, why do so many people still insist on going to the trouble of typing and sending me spam e-mail or making comments that are clearly going to be deleted? I've often wondered about that.
Back in my days as a private pilot we had tons of safety regulations and I remember a flight instructor reminding me that many of those regulations were in place because somebody died. It's not that big of a deal with a blog, but in life many people ignore warning signs, sometimes with tragic results.
Warning signs and labels are everywhere and many appear to be just plain stupid. Who's going to deliberately stick their hand into a snowblower with the auger rotating, yet people do it all the time.
We live in a technological world which is filled with more powerful machines and more potent drugs and chemicals. And, some of the dangers we face are subtle. Add to that the fact that the cost of injury, insurance and litigation is out of control.
I used to work part time for an expert witness in industrial safety and can can tell you that some of the lawsuits in which she was called to testify were beyond belief.
No matter how careless a person's actions may have been, one or more companies got sued. She explained that if you are injured on the job the lawyers look at EVERYONE involved and then rank them according to who has the most money. The one with the most money money is the first named in the lawsuit with the others tacked on in order of the amount of money they may have.
In taking depositions lawyers spoke to anybody that was even remotely involved and asked a ton of irrelevant questions before getting down to asking what they saw. One deposition I read was 50+ pages and at the end, when the witness was asked what he saw, he stated that he did see anything because he was inside a nearby building! She explained that lawyers get paid by the hour so that's why they do that. But, I have digressed a bit.
The bottom line is that warnings often fail to change people's behavior. Either the warning goes unnoticed or it is seen but ignored. Warnings use to be given using such things as color, shape, location, pictures vs. text, size and so on. However, recent research seems to show that effective warning design depends as much on the person seeing the warning as its message. They have to decide whether or not to comply.
Besides all the technical and/or psychological explanations, I think we are inundated with warnings on everything...the weather, news reports, etc. including many mundane things like don't swallow toothpicks to the point our mind is numbed to them. And, that includes the warning not to spam my blogs.
Read the rest of the story in The Psychology of Warnings...HERE
Why Are People Ignoring Expert Warnings?—Psychological Reactance...READ
Posted by Tartajubow at 11:20 AM