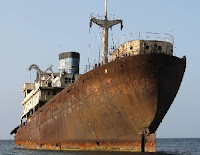 A ghost ship, or a phantom ship, is a vessel with no living crew aboard; it may be a ghostly vessel or a physical derelict found adrift with its crew missing or dead. The term is sometimes used for ships that have been decommissioned but not yet scrapped, as well as drifting boats that have been found after breaking loose of their ropes and becoming carried away by the wind or the waves.
In recent years Japan holds the records for the number of ghost ships that appear. Every year the remains of dozens of ghost ships turn up in Japanese waters. Typically, the ships are small wooden boats believed to be North Korean fishing vessels that are ill-equipped for going to sea. Some boats have been found empty but at least 25 people have been found in advanced states of decomposition, probably dead from starvation or exposure.
Marine Insight has a nice article on these intriguing ships titled Top 10 Mysterious Ghost Ships and Haunted Stories of the Maritime World HERE. You eill also want to read the National Geographic article HERE.
Posted by Tartajubow at 8:31 AM