Dead Mouse Odor Coming Out Of A Wall

A mouse can distort or shrink its body to a fraction of its normal height to squeeze into some tight spaces...smaller than a dime. Because we have a woods behind our house that’s crawling with wildlife, snakes and assorted small creatures, field mice (and an occasional snake) in the shed are not uncommon, but a while back I suspected there might be mice in the garage. By the way, if you see one mouse, there are more!
I elected to get glue traps and set them around and they worked. The only problem is that glue traps do not kill the mouse...you have to do that yourself. It was easy...take the trap with the mouse stuck on it out to the driveway and decapitate it with a hatchet.
After trapping four and not getting any more for several days, it was time to make a diligent search for entry points and seal them up. Apparently the entry point was around the sump pump pipe where it goes through the wall. Sealing around it must have been successful because in a couple of days I heard a scratching sound coming out of the wall that kept getting fainter and fainter then stopped. It was obvious that I had sealed up a mouse in it's hidey hole and unable to escape, it died in the wall.
Unfortunately, while the mouse could not get out of the wall, the odor could...there was a repugnant dead mouse smell coming out of it. Tearing out the wall wasn’t really an option because the mouses’s exact location was unknown. Ninety degree weather didn’t help the smell either. What to do?
Waiting several weeks for the smell to dissipate wasn’t a pleasant option. That’s when I discovered a few hacks that seemed worth a try. In order to achieve the best result, using two or more of these tricks was recommended.
# Vinegar. This is one of the simplest and easiest tricks. Get a bottle of vinegar and fill several plastic cups with it, then place them in strategic locations. The vinegar will absorb the odor, plus it also leaves a rather pleasant smell.
# Coffee filter packs or coffee grounds. Place the filter packs or grounds in the area and they will absorb the smell.
# Baking soda. It's is a good deodorant. When you can’t trace the source of the dead animal’s odor, make a solution of baking soda and water then spray the affected area 2 to 3 times a day.
# Charcoal briquettes. Rob the bag of charcoal you grill with of several briquettes and place them at different locations to absorb the odor.
In my case, I chose the charcoal briquettes and vinegar, but they did not work. Coffee grounds was the next choice; that didn’t work either. 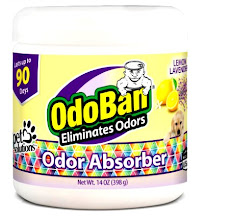 I searched Home Depot’s website and noticed a product called OdoBan Odor Eliminator that sells for $4.00 had received good reviews. It’s a jar of gel that comes in assorted fragrances. You unscrew the lid, remove the paper covering inside, replace the lid, set it out and it absorbs odors. One 5-star reviewer wrote that the gel will remove odors in your home, RV, closets, lockers, litter boxes, kennels or anywhere you have odors. Great for smoke, mildew or musty odors.
Arriving at Home Depot I noticed that the product seemed to be in limited quantities. According to OdoBan’s website, due to increased demand owing to to Covid-19, they have temporarily shifted production to only making OdoBan Disinfectant concentrates and ready-to-use sprays. However, they do plan to resume normal production of other products, like OdoBan Solid Odor Absorbers, very soon.
I purchased a jar in the morning and placed it near the area where the dead mouse might be. That evening it seemed as though the smell had lessened. The next morning it was gone! OdoBan is amazing stuff and I am off after I post this to purchase a couple of more jars. One for the laundry room and one for a spare.
Posted by Tartajubow at 7:56 AM