Vellux Blanket Plugs Up Our Washer 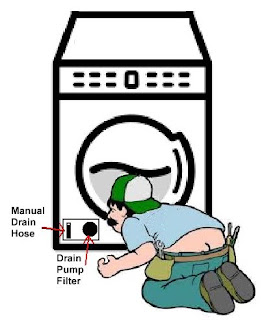 First off, if you own, or are planning to purchase an LG washer be aware that finding a repairman can be difficult. One repairman told me they are manufactured in Korea and parts are difficult to get so he does not work on them. And, at least five repair places told me they did not repair LG washers. I ended up calling LG Customer Service to get the names of places in my area that repair them and there wasn't many.
We had one of those light weight vellux blankets that my wife wanted to wash and so she put it in our front load LG washer and within a few minutes she called me because it had made a funny sound then quit. It was showing an error code and trying to pump the water out only resulted in a humming noise. Peering through the glass in the door revealed that the blanket had disintegrated and there was what amounted to a large mass of glop that looked like a sodden mass of blanket fuzz! This is not an uncommon problem with these blankets! Read more about them HERE! 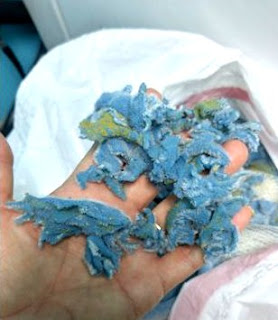 The error code was "OE". Looking up LG washer error codes on the Internet revealed that the OE error code indicates that the washer is unable to drain the water it used during the wash cycle. OE can be triggered by a kinked drain hose or a clogged drain pump filter.
Not being sure exactly where the filter was I was thinking a repairman was required and that's when the whole rigmarole of finding a repairman started. After finally locating one and scheduling an appointment I did some further research on Youtube (everything is on Youtube!) and found the solution. It turned out that it was very simple to make the fix.
Down in the lower left on the front of the washer is a small door and behind it is a manual drain hose and a filter that unscrews. Using the drain hose, I drained all the water into a bucket then unscrewed the filter...it was full of a sodden mass of blanket fuzz.
After cleaning out the filter and running the washer through several cycles to flush out the remaining fuzz, everything was fine and I saved at least a $90 service call charge. Note that during the flushing process a wire screen had to be placed over the deep sink drain that the washer discharges into in order to keep all the fuzz from going down the drain and clogging up the deep sink!
Posted by Tartajubow at 7:47 AM